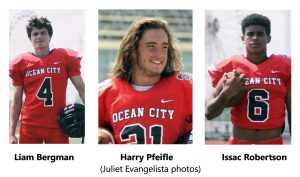 In the first quarter at Carey Stadium tonight the Ocean City High School football team was the definition of dominant.

The Raiders had the ball three times and scored all three. And they gained a first down on the first eight times they snapped the ball.

Ocean City went on to a 41-0 victory that lifted their record to 2-1. OCHS entered the game No. 11 in power points in South Jersey Group 3 and should move up with the win. The Raiders were the only Group 3 team that had only played two games, a disadvantage that will even out as the season progresses.

Senior Issac Robertson scored the first TD on a 19-yard run just 90 seconds into the game. Less than four minutes later, senior quarterback Harry Pfeifle went over from 10 yards out. Then, with 1:39 on the clock, senior Liam Bergman scored from 13 yards away.

The Ocean City offense line – including Sam Holmes, Art Spackman, Chad DiDonna and Dan Auberzinsky – took command of the line of scrimmage and the backs took advantage of the blocking to rip off yards in large chunks, play after play.

Pfiefle scored again – his fourth TD of the season, early in the second period from three yards out. Just before halftime, Pfiefle connected with Bob Shallcross for a 15-yard touchdown to make it 34-0 at intermission.

Ocean City, resting a number of starters in the second half, got a final score midway through the third period when Cian O’Donoghue raced 23 yards for the score, his first varsity touchdown. That score created the running clock situation (a 35-point lead or more in the second half).

Keith Larkin was five-for-five kicking extra points. He did not get to kick the sixth extra point when the snap was off center. Larkin is eight-for-eight on the season.

Because they played on Thursday, the Raiders will have an extra day to prepare for next Friday’s game at Absegami (1-3). The Braves defeated Lower Cape May but have lost to Cedar Creek, St. Joseph and Eastern.

EXTRA POINTS: … West Windsor-Plainsboro South has now lost eight straight over two seasons. In Ocean City’s two games with the Pirates, the Raiders outscored them, 76-0 … Ocean City played again without starters Jon Talese, Jackson Young and Alex Morales … the video of the entire game is available at http://www.OceanCitySports.com, where a full box score and completed three-game stats will be available …