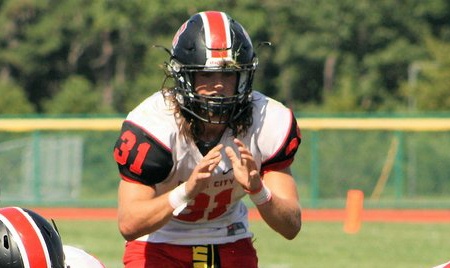 GALLOWAY TOWNSHIP- Ocean City used three touchdowns by Harry Pfeifle to build a lead tonight against Absegami and then sealed the game when Art Spackman intercepted a pass in the final two minutes at the Absegami two-yard line and stepped into the end zone for a touchdown.

The Raiders won the game, 27-14, to improve to 3-1 for the first time in 16 years and strengthen their position in the South Jersey Group 3 power ratings. Absegami dropped to 1-4.

Absegami scored first on an 18 yard run by quarterback Andrew Marcucci. The Braves got good field position when Steve Wilkins caught the pooch kickoff and returned it inside the Ocean City 35.

On Ocean City’s first play, the snap sailed over Pfeifle’s head. He scrambled after the ball and was taken down on the two-yard line. But a leaping catch by Bob Shallcross got a first down on the 30 and Pfeifle then raced 70 yards for a touchdown to tie the game. Spackman, Chad DiDonna, Sam Holmes, Brandon Lin and Dan Auberzinsky all sealed their blocks to create a hole and Pfeifle outran the secondary.

Both quarterbacks scored again on one-yard runs in the second quarter and it was 14-14 at the half. 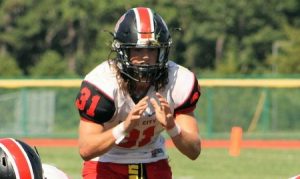 The Raiders took the lead early in the fourth quarter after a punt return by Brandon Lashley, a shovel pass to Liam Bergman and a 36-yard TD run by Pfeifle (above), his third touchdown of the game and seventh of the season. The OCHS quarterback carried the ball 19 times for 185 yards.

Later, when Absegami was trying to get a final drive started from deep in its territory, Austin Green put heavy pressure on Marcucci as he dropped back into the end zone and his flip pass over the middle was picked off by Spackman and the 6-1, 223-pound tackle stepped into the end zone to seal the win.

Ocean City goes to Cape May Court House next Friday to meet Middle Township, which will come into the game with a 3-3 record.

EXTRA POINTS: … Keith Larkin’s streak ended when he missed the final extra point in the game. He had made 11 straight … junior Austin Greene had two more sacks. He set a new school record in the previous game with four sacks. The old record of three in one game was shared by Pete Simon, Ernie Nelson and Dan Stillwell …. Ocean City played again without starters Jon Talese and Jackson Young. But Alex Morales returned and had a sack. Vic Mahar (6-1, 235), the transfer from St. Augustine who had to sit out the first four games, will be in action next Friday … Absegami kicker Zach Sterr has 106 career kicking points, a school record. Only 18 kickers in CAL history have scored 100 or more points … it didn’t matter because the outcome had been decided but the officials screwed up the clock administration at the end of the game …. the video of the entire game is available at http://www.OceanCitySports.com, where a full box score and complete four-game stats will be available …