Harry Pfeifle of the Ocean City High school football team is the CoastSportsToday.com Athlete of the Week. 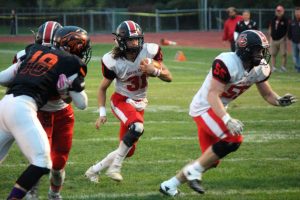 CAPE MAY COURT HOUSE- It took Ocean City about 16 minutes to take control of tonight’s game with Middle Township.

Senior quarterback Harry Pfeifle scored twice in the first quarter and OCHS got two more in the first four minutes of the second period en route to a 47-8 win over Middle Township.

Ocean City improved to 4-1 while Middle dropped to 3-4.

Pfeifle (12 carries, 77 yards) scored three times in the game, giving him 10 touchdowns in five games. He is among the top scorers at Cape-Atlantic League schools. He went 17 yards for one score, aided by Josh Rolls’ downfield block, and ran through a couple tackles on his 12-yard score after Sam Holmes’ block helped give him an opening.

After Pfeifle’s two scores in the opening period, Austin Green was bearing down on Middle quarterback Cameron Hamer and Tom Meehan picked off his pass in the first minute of the second period and streaked 44 yards for a touchdown. Then, less than three minutes later, Liam Bergman got blocks from Holmes and Vic Mahar and raced 62 yards for a touchdown, his third of the season. Keith Larkin booted his fourth straight extra point and it was 28-0 with 8:47 left in the half.

Early in the third quarter, Issac Robertson used a block by Bill Kroeger to find a seem and ran 15 yards for a touchdown. Three minutes later, Holmes, Mahar and Keegan Alvord cleared the way for Pfeifle’s third score from three yards out.

Middle got on the board in the fourth quarter when junior quarterback Cameron Hamer found senior Cody Kern in the end zone from 25 yards out. It was Hamer’s third TD pass of the season and was set up by a 31-yard wingback completion to Mack Selby off a reverse.

Brandyn Pokrass scored Ocean City’s final TD from a yard out in the fourth quarter.

Ocean City kept the pressure on Hamer throughout the game, forcing him to scramble and throw on the run. Parker Bristol also picked off a Middle pass and Mahar, Travis Stoerrle and Brandon Lin all had sacks. Mahar, a transfer from St. Augustine, was seeing his first action of the season after sitting out the required four games. The Raiders now have 17 sacks in five games.

The win moved Ocean City up to No. 4 in the Group 3 playoff picture according to the NJSIAA power ratings. If they can hold that position or move higher they would open the playoffs with a home game. Middle Township, which entered the game No. 4 in Group 2, dropped down to seventh. The Panthers will be idle the next two weeks and could need a win over Pleasantville on Nov. 3 to qualify.

EXTRA POINTS: … Keith Larkin kicked five extra points and is now 16 for 18 on the season … Travis Stoerrle, Brandon Lin and James Rice led the Raiders with six tackles, Stoerrle and Issac Robertson each getting four solos. Gary Nagle was involved in 11 stops for Middle with Aaron Garcia making eight solos … Middle continues to struggle with injuries. Seven key players were missing tonight and a couple others, including wide receiver Mack Selby, were banged up in the game … the video of the entire game will be online at http://www.OceanCitySports.com, where a full box score and completed five-game stats are available …