The Middle Township High School field hockey team's players and coaches are all smiles after beating top-seeded Woodstown in a South Jersey Group I playoff game. 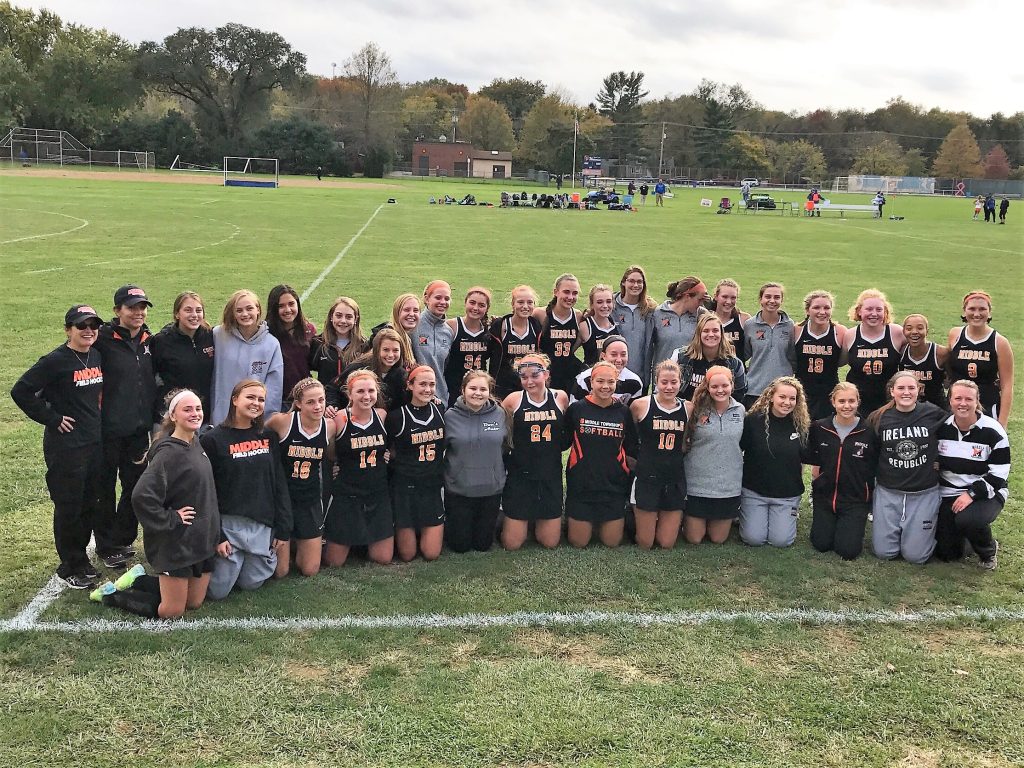 The Middle Township High School field hockey team’s players and coaches are all smiles after beating top-seeded Woodstown in a South Jersey Group I playoff game.

Her team was playing on the road against the No. 1 seed. But Middle Township High School field hockey coach Janina Perna was fully confident when Wednesday’s South Jersey Group I semifinal game against Woodstown went to overtime.

“We’re very good in overtime because have such good athletes on our team,” Perna explained. “You get seven kids to cover the whole field so I always just send our best seven athletes out there. And we totally dominated.”

Freshman Katie Herlihy got behind the defense with four minutes to go in the extra period and scored her second goal of the game as the Lady Panthers stunned the Wolverines, 3-2, to advance to the South Jersey Group I title game for the third straight year.

Middle, which won the sectional championship for the first time last fall, will play at second-seeded Schalick Friday at 2 p.m. for the South Jersey championship. Middle beat Schalick, 7-2, in last year’s title game.

“I saw them play Woodstown and they’re definitely better than they were last year,” Perna said. “It’ll be a really hard game for us.”

Middle took an early lead against Woodstown (15-6-1) when Lexie Frank tallied but Woodstown’s Daisy Baldwin tied the game shortly thereafter. Herlihy scored her first late in the first half to give Middle a 2-1 lead at the break, but Baldwin scored again with 20 minutes remaining to level the game yet again.

Middle played more than 10 minutes of the game a player down due to the issuance of yellow and green cards. But once the game went to overtime, the Lady Panthers consistently pressured the Woodstown defense until Herlihy finally got the game winner.

“We got quite a few shots off in overtime and then Katie finally got a breakaway and it went in,” Perna said.

The win exorcised some demons for Middle’s program, which was eliminated from the state playoffs in road games at Woodstown for three straight seasons (2013-15), including in the 2015 sectional title game.

“We’re playing so many young kids that they don’t really have a history with Woodstown,” Perna said. “They haven’t gone there and lost and most of them probably didn’t know anything about them and that probably helped.”

Middle (12-9), which starts six freshmen and sophomores, won for the sixth time in seven games.

“They were very excited to the play,” Perna said. “They knew they had played good opponents all year long and they were ready. In years past we played maybe not as strong of a schedule and then we’d get to the playoffs and we were playing the best teams we’d seen all year. This year we felt like everyone we played was good. We were confident in the fact that we’d played good teams all year.”

This was pegged as a rebuilding season for Middle after winning last year’s South Jersey championship. But the team progressed much quicker than Perna first anticipated.

“I think it’s really exciting because this wasn’t really expected of this group,” she said. “We have a bunch of underclassmen and we were losing a lot of games early. I really thought we were a good team waiting to happen and then all of a sudden as we got toward the end of the season things started to click. They’ve really been playing great the last six or seven games.”

They hope to continue to play great for at least one more game.