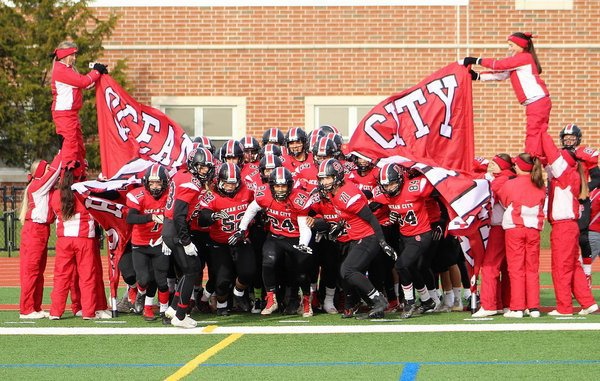 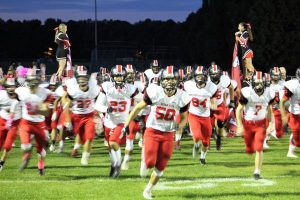 There were a lot of memorable moments during Ocean City High School’s 2017 football season.

OCHS lost three games, all three to playoff teams and two of the three to NJSIAA champions. And the season had possibly the most remarkable ending ever with the final play – a failed two-point conversion by Pleasantville – leading to an Ocean City celebration.

There was also the “big three”, the trio of backs who combined for one of the finest performances in school history.

Harry Pfeifle, returning after missing his entire junior year following surgery, ran for 838 yards and 16 touchdowns, both records for an Ocean City quarterback. The Raiders moved from the most effective passing QB in school history (Andrew Donoghue) to the most successful running QB, who averaged 6.6 yards per carry. Pfeifle had two 100-yard rushing games and two 100-yard passing games.

Liam Bergman ran for 759 yards and seven touchdowns. His quickness and breakaway speed allowed him to contribute some big runs, like 67 yards against Delsea and 49 yards against St. Joseph. Bergman finished his career with 1,131 yards, the 29th highest total in school history.

Issac Robertson gained 477 rushing yards this year and 959 in his career, No. 34 on the OCHS list. He scored eight rushing TDs, two as a pass receiver and one with an 84-yard kickoff return. A regular two-way player, Robertson was also second on the team in solo tackles, had an interception and broke up four passes, second on the team. And he also had an incredible pass efficiency rating of 1051.6. His only pass was a 74-yard touchdown against Cedar Creek.

But this trio would not have gained the yards it did without the likes of seniors Art Spackman, Sam Holmes, Chad DiDonna and Vic Mahar – the guys up front who created the openings for big gains.

Shallcross was the middle man in the outstanding hook and lateral play that the Raiders executed against Delsea. He was on his way to the ground after catching Pfeifle’s pass but made a perfect lateral to Robertson, who raced down the sideline for the score. The play covered 58 yards and was selected by NBC-10 in Philadelphia as the third best of the season. Of course, that only included plays the station had on video.

Larkin kicked 31 of 36 extra point attempts, one of the best in the CAL this year and the third highest total for one season in school history.

Pfeifle and Spackman were first team, all-division on offense in the West Jersey Football League. Meehan, Rice and Robertson were first team picks on defense. Second team selections were Bergman and DiDonna on offense and junior Brandon Lashley on the defensive team as the punter.

Lashley will be back next year as a two-way player. Junior Brandon Lin returns next season with a chance to be the first OCHS player ever to lead his team in tackles three straight years. Travis Stoerrle and Austin Green return after a combined 13 sacks this year. Others who will be back with experience include Bill Kroeger, Kevin King, John Craft, Jackson Young and Dan Auberzinsky.

The Raiders have a lot of holes to fill but a lot of young players anxious to move up. The same thing happened last year and things turned out fine. With a new division alignment that eliminates St. Joe and Cedar Creek and substitutes Egg Harbor Township and Bridgeton, next season could be another season filled with good memories.

Complete OCHS football stats – including season totals, box scores of every game and complete video of most games – can be found at http://www.oceancitysports.com/ocfootball.html.