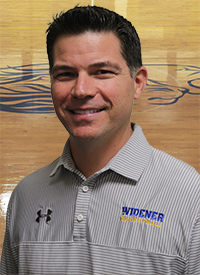 Ocean City native Chris Carideo is one of eight people set for induction into the Al Carino Basketball Club of South Jersey Hall of Fame, the club announced this week.

The induction ceremony will take place Sunday, Feb. 11, at the Crowne Plaza Hotel in Cherry Hill.

Currently in his 12th season as the men’s basketball coach at Division III Widener University, Carideo first attended Ocean City High School before transferring to St. Augustine Prep, where he was a first team Cape-Atlantic League all-star as a junior and senior before graduating in 1991.

He went on to a decorated career at Widener, where ranks second in school history with 2,067 points and was named a Division III All-American. He set a then-Division III record with 402 three-pointers and still holds the national record for consecutive games with a three-point basket at 75. Carideo led the country with a 95.5 free-throw percentage in 1991-92. He was inducted into the Philadelphia Small College Basketball Hall of Fame in 2012.

After seven seasons as an assistant coach at both Widener and the United States Merchant Marine Academy in Kings Point, N.Y., Carideo became the head coach at Merchant Marine in 2002. His teams won two Skyline Conference championships during his five-year tenure.

Prior to his arrival at Widener, Carideo spent five seasons as the head men’s basketball coach at the United States Merchant Marine Academy in Kings Point, N.Y. He piloted the Mariners to Skyline Conference regular season and tournament championships in 2002 and 2003 as well as NCAA Tournament appearances in each of those years, which included a trip to the second round in 2003. Carideo was the 2002 Skyline Conference Coach of the Year and still remains second on the Academy’s all-time wins list with 86 victories.

Carideo, also the assistant athletic director at Widener, entered this week with a career record of 185-142 as head coach at Widener. He has guided the Pride to three Commonwealth Conference championships.

Carideo graduated from Widener in 1996 with a bachelor’s degree in psychology and secondary education. He also played one season professionally for the Trenton Flames of the International Basketball League. He currently resides in Woodlyn, Pa., with his family. His wife, Stephanie (Agger), is a graduate of Lower Cape May who scored 1,000 career points in both high school and at Division II Philadelphia University (now Jefferson University).