The winter sports season has brought success for Ocean City High School basketball. Both the girls team (No. 19) and the boys team (No. 25) are ranked among South Jersey’s best teams.

But lots more has been happening during the OCHS winter.

For example, the boys swim team (8-3) will travel to Shawnee tonight (Friday) to face Shawnee in the quarterfinal round of the NJSIAA Group B South Jersey Tournament. Shane McGrath’s team defeated Cherry Hill West, 114-56, in the opening round.

The girls swimmers (7-2) are the No. 1 seed in South Jersey B as they seek their fifth consecutive South Jersey championship. In the quirky format for swimming competitions, the top two seeds are advanced all the way to the semifinal round before having to compete. The Raider girls will host Shawnee on Monday in one semifinal. Shawnee defeated Gloucester Tech in the quarterfinals.

The indoor track teams just competed in the South Jersey Group 3 Meet at Toms River’s Bennett Center. The boys finished fifth in team scoring and the girls were sixth.

And the wrestling team (8-14) has only four seniors and has won three of its last five matches.

Record-breakers Nate Hays, Matt DiMarino and Steve Gooden dominated for the OCHS boys in the pool during the win over Cherry Hill West.

Hays won the 200 individual medley and the 100 breaststroke while also swimming the first leg of the 200 medley relay and the third leg of the 400 freestyle relay, which were also both winners. 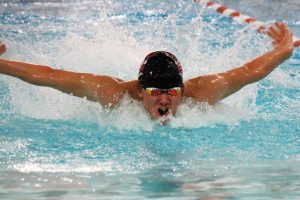 DiMarino (above) won the 100 butterfly and 100 backstroke; joined Hays, Brian Walsh and Ben Wiley on the 200 medley relay team; and was part of the 400 freestyle relay, a team that set a new school record in the event earlier this winter.

The Raiders also got a win from Doug Grisbaum in the 500 freestyle.

The Ocean City girls, who are resting from competition this week because of the NJSIAA format, are led by Ryann Styer and Maggie Wallace – two girls who have been on a South Jersey champion each of their first three years. Styer (below) will head to the University of South Carolina holding the CAL record in both the 50 and 100 freestyle. Wallace, who will swim for Indiana University, set a new CAL record in the 400 freestyle, breaking the mark set by former teammate Amanda Nunan. 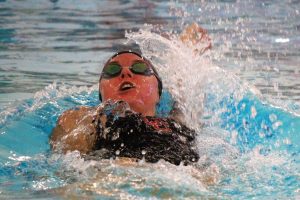 There has also been success for OCHS in diving. Junior Isabella Wamsher won the girls Frank Forde CAL Individual Diving championship in competition with nine other girls. She won the gold medal by 3.34 points.

Ocean City’s girls finished one-two in the 3200 meters in the South Jersey Group 3 Indoor Track Championships. Senior Alexa Weber, committed to St. Joseph’s University, won the South Jersey title and freshman Alexa Palmieri was two seconds behind in second place. Sophomore Casey McLees was fourth. That’s Weber on the right and Palmieri on the left in the photo, below. 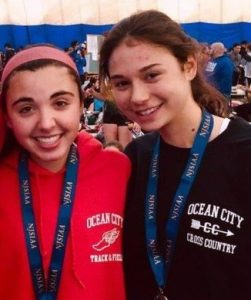 Also in the girls meet, junior Brooke Farr was sixth in the 1600 meters.

For the boys, senior Jesse Schmeizer was third in both the 800 and 1600 meters; senior Nick Oteri was second in the pole vault; senior P.J. Short was fourth in the 800; senior Korey Greene was sixth in the 3200; and senior Matt Zelinski was sixth in the 400.

The NJSIAA State Group 3 Indoor Track Meet will be on Feb. 16 in Toms River.

In Thursday night’s wrestling match with Middle Township – a 37-30 win for the Panthers that set a school record at Middle for wins in a season – Rosario LaRosa won an overtime decision at 152 pounds, junior Bill Kroeger was a winner at 182 and the Raiders won four matches by forfeit.

Dave Castellini has been bringing these young wrestlers along steadily in a rebuilding effort after five straight winning seasons. The Raiders will host Deptford, Palmyra and Vineland on Saturday in the Dixie Howell Gym in a quad.

It has been a good winter for all OCHS teams and there is lots more to come.