When Chuck Dougherty played high school baseball in the mid 1960s, teams usually played less than 20 games in a season.

That made his achievement of recording 108 career hits rather remarkable.

The 1966 graduate of Middle Township High School was a four-time Cape-Atlantic League all-star. He went on to enjoy a very good career at Glassboro State College (now Rowan University).

Dougherty thought enough of his baseball experience at Middle Township that he returned to the school as a teacher and coach. He’s coached baseball or softball at the school almost continuously since 1971.

Hang around that long and some milestones will come. Dougherty is now on the verge of reaching a rather significant one, as he enters this week three wins shy of 300 for his career. 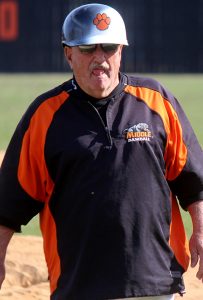 “Yeah, it does mean something,” Dougherty admitted. “I think more than anything it means I’ve been around a long time. But this really isn’t something I’ve done. My players have done it for me. But it’s something that when I’m done I can look back on.”

Dougherty has already made history during his coaching career. According to available records, he’s the only coach in CAL history to win more than 100 games as both a head baseball and head softball coach.

Dougherty started his coaching career fresh out of college as the first softball coach in Middle Township High School history back in 1971. He coached softball again in 1972, then jumped to baseball as an assistant coach before taking over as head coach for the first time in 1979. He stepped down after six seasons, then returned to the diamond in 1992 as head softball coach for the second time, coaching seven more seasons. All told, he posted a 108-60 record as softball coach.

Dougherty came back to the baseball program as head coach in 2000 and has remained in that capacity ever since. He takes a career baseball record of 297-219 into this week.

Dougherty retired as a schoolteacher about a decade ago.

“That made it a little harder because I don’t have as much contact with the kids,” Dougherty said. “I could see them in school all the time and really earn their trust. Now the only way I can earn their trust is to get out here and work with them and help them. So that’s what I’ve tried to do.”

Middle hasn’t been blessed with overwhelming elite baseball talent over the years. But there have been some very good players and some good all-around athletes that have gone through the program, helping make Middle competitive year in and year out. This season is a prime example. Middle enters this week at 5-9, but six of the nine losses have been by two runs or less. Last week, Middle lost by just 1-0 to Diamond Classic invitee Ocean City, which enters this week at 13-1.

“There’s still a lot of baseball left,” Dougherty said. “We still have a chance to do some things.”

The close relationships Dougherty has developed with his many assistant coaches over the years have also helped make his coaching experience enjoyable, he said. There’s been no better relationship than the one he’s had with his older brother, Frank, who’s been one of his assistants in both softball and baseball for years.

“The best part about is that we get to see each other every day during the season, whether we’re happy with each other or not,” Dougherty said with a laugh. “He and I were the only two kids in our family and we spent every day together when we were young. We never really separated until he graduated high school. Coaching is something he and I hold together. It’s a great bond for us.”

Dougherty has also created great bonds with his players. For years, after every game, each player doesn’t leave the field until he shake hands with the coach they all call “Doc.” Most of them also express their gratitude by saying “thank you.”

Dougherty said he isn’t sure how long he’ll continue to coach. But he admits he’s closer to the end than the beginning.

“I’ve had a lot of fun,” Dougherty said. “When you get really good kids to work with and be around, that makes it a lot of fun. I’ve enjoyed it.”