Ocean City vs Pleasantville – by the numbers 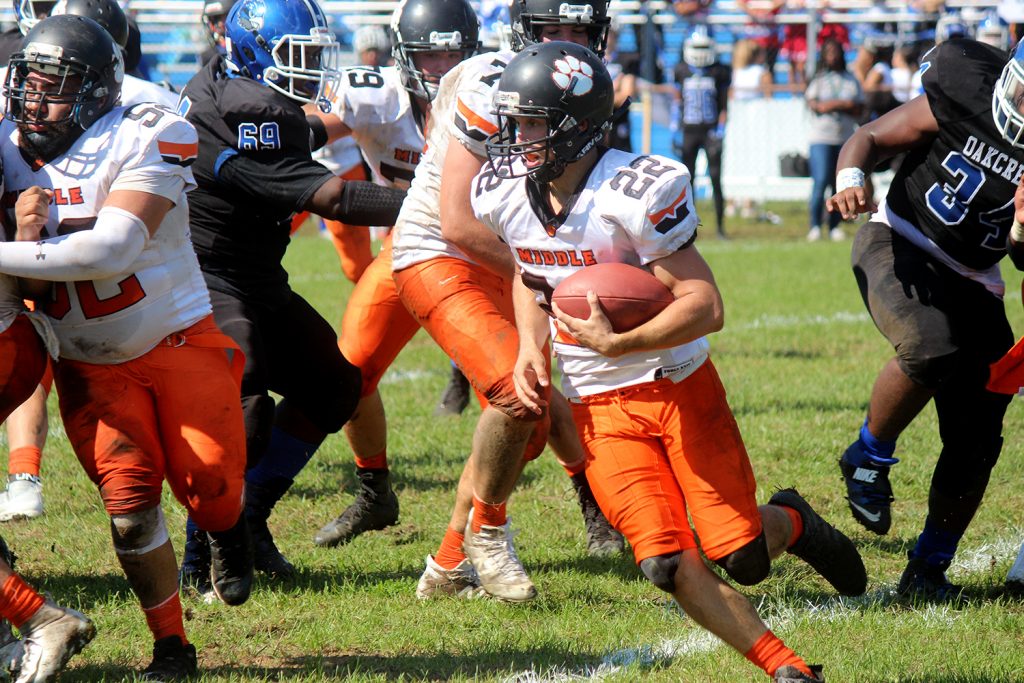 Senior David Hayes has proven to be a solid rushing threat for the Middle Township High School football team this season. The Panthers host Lower Cape May in the annual Anchor Bowl game Thanksgiving morning.

Since 1922, they’ve played one another in every season except five.

But there’s never any shortage of story angles when the football teams from Lower Cape May Regional and Middle Township high schools meet.

The latest edition of the rivalry — dubbed the Anchor Bowl since the teams moved the game to Thanksgiving Day in 1996 — is set for Thursday at 10 a.m. at Memorial Field in Cape May Court House.

The game will be broadcast live by 98.7 The Coast radio. The broadcast will begin at about 9:50 a.m.

One of the neat plots surrounding this year’s game is that, for the first time in a while, there is no clear-cut favorite, even after Lower won last year’s game, 21-20, as a perceived huge underdog.

Lower enters the game at 6-3, while Middle Township is 4-5. Middle, though, has probably played the tougher schedule and has lost some close games.

But Panther coach Frank Riggitano isn’t buying what some are trying to sell him in that matter.

“They’ve done a very nice job over there,” he said. “I don’t care who you play — you win six football games you’re obviously doing some nice things.

“But this year is a little harder to gauge if you’re just looking at scores because we haven’t played as many similar opponents as we have in the past.”

Lower coach Brian Hindle believes the records and the strength of schedule won’t matter much, and that’s not because he’s following the old cliche that many attach to rivalry games.

“I think there’s different feel to it just because of how much of a layover we’ve both had. It almost feels like we’re starting another season,” he said. “We’re going 20 days in between games. So I wouldn’t necessarily think records have anything to do with this game.”

Both teams haven’t played since Nov. 2. 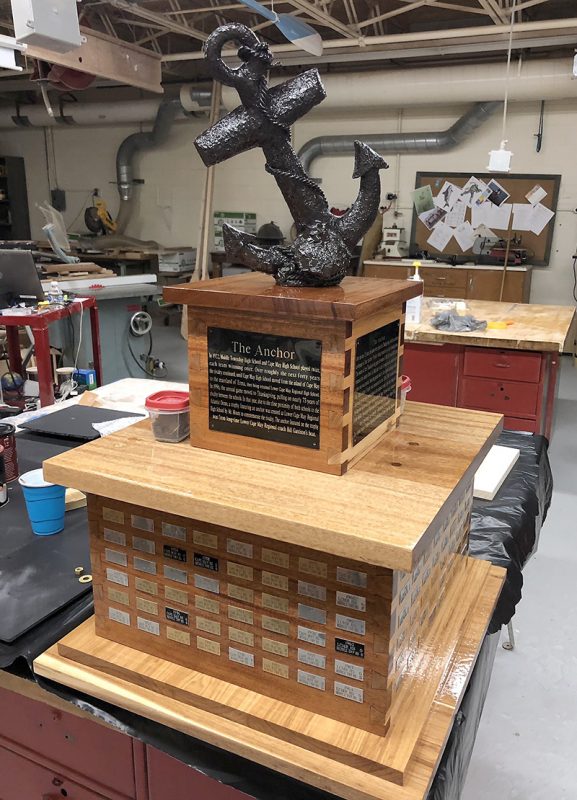 Lower Cape May Regional has created a new Anchor Bowl trophy, complete with plates that have the results of all games played since the series began in 1922. The new trophy will be presented to the winning team on Thursday.

Lower has enjoyed a successful season with a relatively young roster. Middle has endured some injuries to some significant players and has lost a couple of close games it may have very well won had the team been healthier.

Riggitano said Middle is about as healthy as it’s been all season, save for quarterback Cameron Hamer, who suffered a foot injury in the team’s third game of the season and hasn’t played since. Riggitano said there’s an outside chance Hamer could see limited action in what would be his final high school game. It will be a game-time decision.

“Outside of Cam, we’re the healthiest we’ve been in weeks,” Riggitano said.

“If we can maintain possession of the ball and not turn it over and not have penalties I think we can do good things,” Riggitano said. “Like any other football game, the team that makes the least amount of mistakes is probably going to win.

“One of the things that’s made (Lower) successful is that they maintain control of the ball and they can go on long drives on offense,” Riggitano added. “Even when we played them last year we only had the ball three times in the second half. Sustained drives are a product of their offense. If we allow them to control the ball consistently for six-or seven-minute intervals, we’ll be in trouble. Their quarterback is very diligent in making his reads and calls and that presents problems for defenses.”

That Lower Cape May quarterback is sophomore Connor Eckel. He’s rushed for 798 yards and eight touchdowns and has also thrown eight touchdown passes. Jonas Lumbruno is a strong two-way threat who scored four touchdowns in the team’s win over Lindenwold on Nov. 2. Eric Koncyzk leads the defense with 65 tackles. Linemen Joe McGhee and Sean Connelly were first-team all-league selections.

“The biggest thing we have to be concerned with is how tough Middle plays,” Hindle said. “You watch them on film and they are so aggressive, especially on defense. That will pose a challenge for us.

“They have a lot of multi-sport athletes who play really hard. Their quarterback is getting better and better and they always seem to have a stable of running backs that can hurt you.”

Both teams will have to deal with what is expected to be a bitterly cold day, with forecasted temperatures in the low 30s, with wind chills possibly in the teens.

“The kids on both teams will have to be ready to play in the cold,” Hindle said.

“I don’t know how much the weather will affect the kids because they’ll be out there running around,” Riggitano said. He then added with a laugh, “It affects the rest of us more because we’re just standing there watching the game.”

Also of note, a new Anchor Bowl trophy will be presented to the winner. The old trophy had become too small to add more plates to commemorate the winners of each game. Lower Cape May, which built the original trophy that included an anchor from former head coach Bill Garrison’s boat, has also constructed the new one. An anchor remains at the top.

“The other one was getting a little beat up but it was running out of space and that was the biggest thing,” Hindle said. “We did refurbish the other one before but there just wasn’t enough room on it.”

Hindle said the new trophy will include every result of every game played between the two schools dating back to the rivalry’s inception since 1922.

Middle leads the series 57-36-5, not counting three games played in 1943. Middle did not field a high school football team that season, much like other high schools across the country during those times due to World War II. But the old Cape May high school did play a Middle Township Boys Club team three times that season. 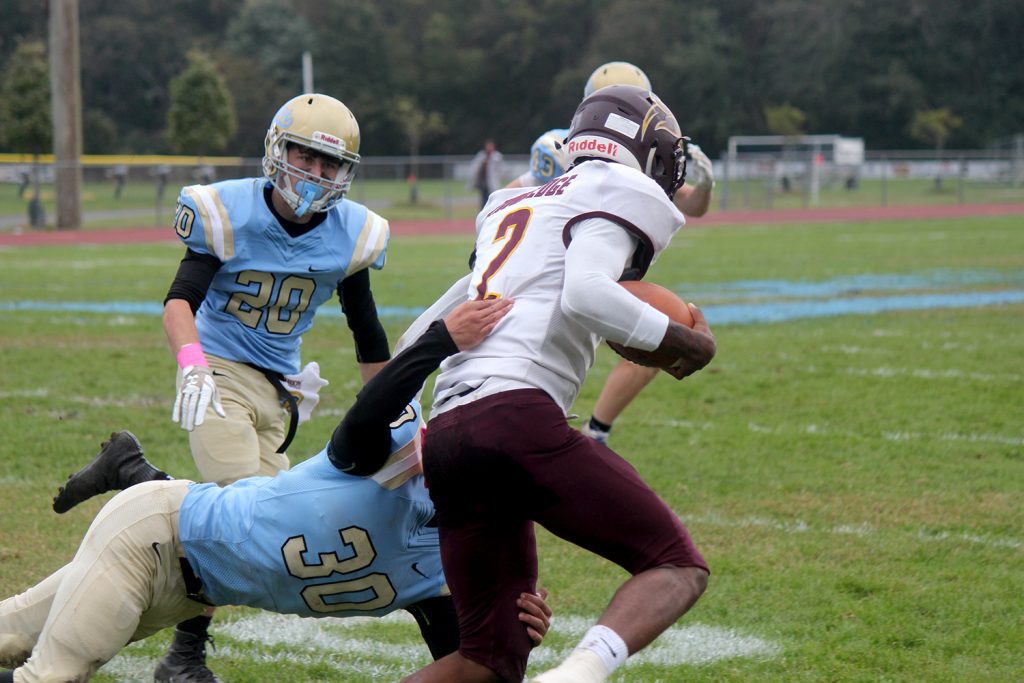