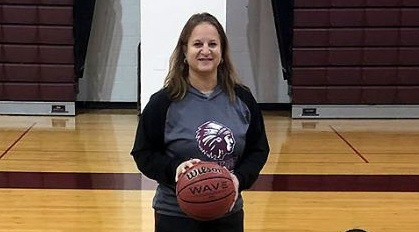 It was more than three decades ago when Teresa Polini became a varsity basketball player at Wildwood High School.

“I didn’t really play much as a freshman,” she remembers. “Our team in 1988 was loaded with juniors and seniors and the previous year they were South Jersey champions.  I remember going to one of my first high school practices.  It was a bit intimidating at first for us freshman, but eye-opening at the same time.  My mentality was and always will be to practice hard all the time and make your teammates better.  Never back down from anyone.  That’s exactly what I did at practice.  I practiced hard and pushed my teammates.  Some didn’t like it, but that’s how I played. I would get mad if I missed a shot or turned the ball over but that was the competitiveness in me.  Coach (Dave Troiano) would tell me to get my head up and move on.  His famous line was ‘This isn’t Crest Memorial anymore.’”

In about a month, that competitive guard from the 1980s and 1990s will be inducted into the Carino South Jersey Basketball Hall of Fame.

“Being named to the South Jersey Basketball Hall of Fame,” she said, “is such an amazing honor.  When my husband, Brian Cunniff, called me and told me I was going to be inducted I was stunned, shocked and in disbelief.  I really didn’t know what to say.  It took a few days for me to process the news.  I’m feeling overwhelmed with joy and happiness, and I’m humbled, thankful and feel very blessed. I can look back and reflect now on why I put in all of those countless years and hours of practicing at the Crest Pier Recreation Center – playing, shooting, dribbling, talking, learning from other players and being a student of the game.  Hard work, dedication and a love for the game of basketball really does pay off.”

Cunniff scored 1,305 points during her career at Wildwood and was the school’s all-time scoring leader when she graduated. She played on three Cape-Atlantic League conference champs, two South Jersey titlists and a state champion. She was selected to every All-South Jersey team and was second team all-state. She was also an all star in tennis and softball.

“My strongest memory of my four years playing at Wildwood,” Cunniff said, “would be our run to our first ever state championship my senior year. There were so many great memories leading up to the championship game but this one memory stands alone.

“The day of the state final we boarded the bus and set out for Monmouth College.  Our fan buses were leaving shortly after our departure.  We left very early because of the great distance we had to travel. We arrived at Monmouth College probably an hour and a half before the start of our game.  The site workers took us to a dressing room.  We dressed and got laced up.  We made our way to the main gym where the game before us had just started.  Out of nowhere, our fans spot us standing in the corner and they erupted in chants of ‘Wildwood, Wildwood, Wildwood’.

“Everyone in the gym was wondering what was going on.  The players on the floor, the coaches coaching in the game, the refs, the people at the scorer’s table and the fans of the game that was being played, were all confused as to what was happening. It was like everything had stopped. People were looking around in disbelief.  How could the fans of the next game be cheering already? It was the greatest feeling ever.  Our fans made us feel like we were playing at home – in the best gym in the county back in little old Wildwood.  All the nervousness disappeared and we were ready and willing. And we won that state championship.”

Following her remarkable career at Wildwood, Cunniff attended Mitchell Junior College (a basketball powerhouse) in New London, CT. She was selected to the All-Conference Teams and scored 1,068 points in her two years. She was recognized as a Junior College All American and selected All-New England Conference. She was elected team captain in 1993 and earned a full scholarship to Rutgers University where she played Division I basketball for the Scarlet Knights. Rutgers captured the Atlantic 10 Conference championship in 1994.

In December of 2017, after more than two decades as an assistant coach to Troiano, she became head girls basketball coach at her alma mater. She guided last year’s team to a 20-8 season and the championship of their division in the Tri-County Conference. The Warriors are off to an 8-2 start this season.

“Coaching under one of the best coaches in the area was such a great experience,” Cunniff said. “I’ve learned so many things from Dave over the past 22 years.  He was, and still is, such a great coach, teacher, mentor and most of all, an outstanding person.  He would do anything for anyone.  He made players feel like they mattered, made them feel like they had a sense of belonging and made them comfortable enough to talk to him about anything. He will always be one of my role models and I hope to carry on what he has instilled in me on and off the court.”

The induction ceremonies will be on Sunday, Feb. 10 at the Crowne Plaza in Cherry Hill. Tickets are $35 and are available by contacting Jack Mongulla at 856-461-8800.

But it’s Teresa Polini Cunniff – that freshmen guard who was a little intimidated to join a championship team 30 years ago – who will get the final confirmation that she is one of the very best in the history of South Jersey basketball.