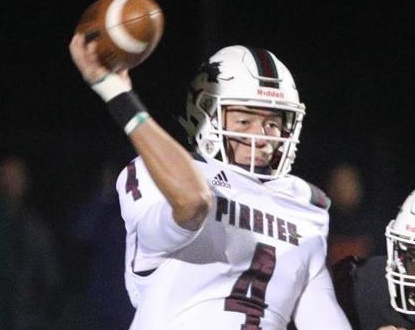 Cedar Creek senior Lou Barrios threw three touchdown passes on Friday night to bring his total for the year to 28, a new record for a quarterback at a Cape-Atlantic League school.

The previous record was 27 by Mainland’s Brent Caprio in 2008. The South Jersey record is 48 by Timber Creek’s Devin Leary in 2016. Barrios is also the only CAL QB to throw five TDs in one game three different times.

St. Joseph senior Jada Byers added a TD and six points to his impressive totals on Saturday in the Wildcats win over Holy Spirit. He holds the CAL record for career points (584) and touchdowns (92). Byers’ career point total is the third most in South Jersey history, trailing Glassboro’s Corey Clement by four points and the South Jersey record-holder, Kevin Harvey of Paulsboro, by 72 points.

Freshman Ja’Briel Mace of Mainland got a 40-yard TD Friday against Ocean City and has scored 90 points this season. The record for most varsity points scored by a CAL freshman is 92 by Nigel Jones of Holy Spirit in 2008.

Senior Manny Reid and sophomore JoJo Bermudez are big parts of the Cedar Creek passing attack. Each has caught eight TD passes this year to lead CAL receivers. Six different Pirates receivers have caught TDs this year. The single-season record is 17 by Buena’s Kenny Miles in 2008.

Junior Taylor Manning of Cedar Creek leads CAL kickers with 42 points – 36 PATs and two field goals.The single-season record for kicking points by a CAL player is 72 by Jim Galea of Hammonton in 2000.

And senior Keon Henry of Pleasantville has three return TDs – two punts and one kickoff. That is not only the most by a CAL player but more than any other CAL team.

Cedar Creek (34.7) has scored the most points per game and Mainland (8.4) has allowed the fewest among the 17 CAL football teams playing in the West Jersey Football League. Ocean City is second in both categories.

There are lots more individual and team numbers to see. Check out all those who are among the tops in scoring entering the playoff week here.