Raiders battle No. 10 ranked Cedar Creek to the wire before losing 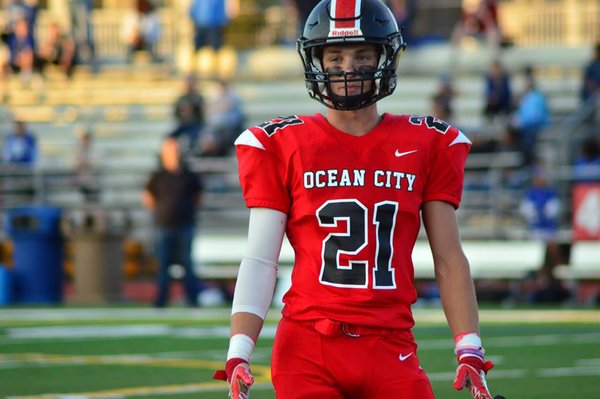 EGG HARBOR CITY- The Ocean City High School football team took on one of the ten highest ranked teams in South Jersey Saturday afternoon and took them down to the wire.

The Raiders led No. 10 ranked Cedar Creek entering the fourth period before the Pirates pulled out a 22-13 win. The victory lifted Cedar Creek to 3-0, OCHS drops to 1-1.

Cedar Creek senior Clay Olley kicked a 22-yard field goal on the second play of the fourth quarter to give the Pirates a 15-13 lead. They then got the ball back and scored a one-yard disputed TD on fourth down with 1:13 left in the game. When Olley kicked the extra point Cedar Creek had a nine-point lead and control of the outcome.

The final TD was a quarterback keeper by sophomore Lou Barrios and ended with a pile of players at the goal line. Ocean City players thought they had kept him out of the end zone but, after a delay, the officials raised hands to signal the touchdown.

The Raiders took the lead halfway through the first period when Harry Pfeifle pitched the ball back to Issac Robertson and he threw a pass downfield to Brandon Lashley, who made a great spin move to avoid a tackle and scored his first varsity touchdown. Keith Larkin kicked the extra point.

Barrios produced the next two scores for Cedar Creek, a 47 yard TD pass late in the first period that cut the OCHS lead to 7-6 and a seven yard run in the second quarter to give the Pirates a 12-7 lead. 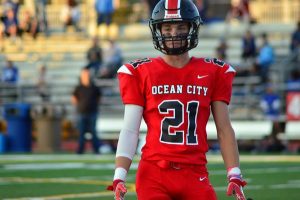 Ocean City responded, recovering a Cedar Creek fumble (they fumbled seven times, losing four) that led to a 10-yard pass from Pfeifle to Lashley (above), who caught the ball on the goal line and sliced into the end zone for his second touchdown and a 13-12 Ocean City lead that the Raiders carried into the fourth quarter.

Though the Raiders struggled a bit to get their running game going, their defense was strong against a Cedar Creek team with a lot of weapons. Lashley, Robertson, Travis Stoerrle, Kevin King, Bill Kroeger, Tom Meehan, Art Spackman, Austin Green and Chad DiDonna were among the players who made big plays.

After beating Absegami in its opener, Cedar Creek lost on the field in week two to Delsea. But when Delsea discovered it had used an ineligible player, it contacted the NJSIAA and Cedar Creek was awarded a forfeit. Cedar Creek will host Camden next Saturday.

Ocean City had won its opener against Oakcrest before its bye week last weekend. The Raiders have a short week – they play West Windsor-Plainsboro South (0-3) on Thursday at 5:30 p.m. in Carey Stadium.

EXTRA POINTS: Lets hope Cedar Creek puts those dark grey jerseys with the dark green numbers away. There isn’t much point in having numbers and selling programs if the numbers can’t be seen clearly from the bleachers….Cedar Creek has now beaten Ocean City all four times they have played but the combined score of the first three meetings was 89-7….many players on both teams were bothered by the heat and humidity in Egg Harbor City, including leg cramps caused by dehydration….it was Varsity Day at Cedar Creek with all of its fall varsity teams (except cross country) playing at home….