COUNTY GRID PREVIEWS: Ocean City, Middle & Wildwood are all at home this week 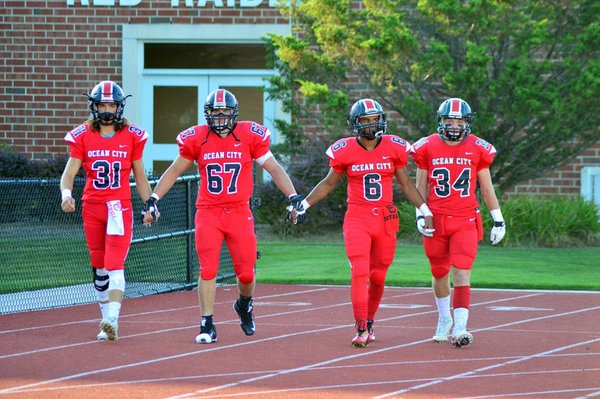 If you were so inclined, you could see all four Cape May County high school football teams this week because they play on three different days. Here is a bit of information about all three of the games.

Coaches: Ocean City’s Kevin Smith, is 24-38 in his seventh season as a head coach. WW-P South’s Skip Edwards is 6-36 in his fifth season with the Pirates. Edwards overall coaching record is 89-157-3, including stops at Holmdel, Lakewood, Hightstown, Dunellen and St. John Vianney.

History: The Raiders won, 35-0, last season in the first meeting between the schools. The two-hour trip to Princeton Junction was the fifth longest trip an OCHS football team has ever made.

What’s at Stake: Ocean City is 11th in the current Group 3 power ratings but all the other teams have played three games. The Raiders need the win to advance in the wide-open Group 3 field. WW-P South is not likely to qualify for the playoffs but would surely like to end its seven-game losing streak over two seasons.

Live Radio: The game can be heard on 106.3-The Shore and online at http://theshore.fm/.

Next Up: Ocean City goes to Absegami (1-2) next Friday night for an Independence Division game. West Windsor-Plainsboro South will travel to Nottingham (3-1) next Saturday in a Valley Division game.

Coaches: Middle’s Frank Riggitano is 73-84 in his 17th season. He is 21st among active South Jersey coaches in career wins. The Rams’ Casey Murphy is 8-24 in his fourth season.

Stats: Cameron Hamer has thrown for 200 yards, most of them to Mack Selby. Hamer leads Cape-Atlantic League football teams with four two-point conversions. Gary Nagle has led the defense with 31 tackles, including three for losses. Sophomore Dashaun Harris has run for over 300 yards and four TDs in two games for Gloucester Catholic. Mike McAleer has made 21 tackles for the Rams.

History: Middle edged the Rams, 18-13, last season in what was probably the first meeting between the schools.

What’s at Stake: Middle is currently No. 1 in Group 2 power points, though the Panthers are the only team in the group to have played four games. The Rams are No. 7 in Non-Public 2, though most of those teams have played one more game than the Rams. So this game could impact the NJSIAA playoffs.

Next Up: Middle Township will travel to Triton (2-1) next Friday night. Gloucester Catholic will host Wildwood (0-3) on Saturday.

Stats: Lower QB Brennan Ray has run for 230 yards and two touchdowns. Khamar Matthews has made 14 tackles, three for losses. Vito Hernandez has a rushing touchdown for the Warriors and Christian Tyson hit Nate Lopez for the other score.

What’s at Stake: Neither team is going to qualify for the NJSIAA playoffs and they are not contenders in their WJFL divisions. But after this game, which used to be played on Thanksgiving up until 1983, one of the two teams will have a victory. For the players involved, and the alumni, that makes this a very important game.

Live Radio: Brian Cunniff and Scott Wahl will have the play-by-play on 98.7-The Coast and online at http://987thecoast.com/.

Live Video Stream: Matt Ulmer will stream live video of the game at CoastSportsToday on Facebook.

Next Up: Lower Cape May is off next weekend and will host Oakcrest (0-3) on Oct. 13. Wildwood will go to Gloucester Catholic (2-0) next Saturday.