The high school soccer season in Cape May County is set to begin this week. As a conference champion returning a handful of top players, Ocean City appears to be the class of the county in the preseason. But other teams certainly have the ability to grab some glory of their own as well.

The following is a look at each of Cape May County’s high school girls soccer teams:

The status of Cape May Tech’s program was up in the air of Tuesday evening. Tech did not field a team in 2016 due to lack of enough players and had been in the same situation through the 2017 preseason.

According to sources, school officials were making last-ditch efforts to gauge interest on Tuesday and were to make a decision on whether to field a team this fall by the end of this week.

This year’s Lady Tiger team features an interesting mix of experienced upperclassmen, along with a couple of freshmen who are expected to make immediate impact. 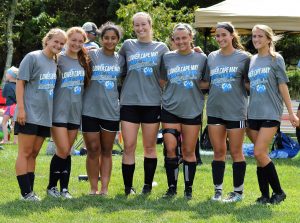 Lower’s 6-12 record in 2016 represented the team’s lowest win total in six years. The makeup of this year’s club suggests improvement is in order.

“After our worst year in six seasons, I believe will get ourselves back over .500,” said seventh-year coach Brett Matthews. “We play in a very competitive (Cape-Atlantic National) Conference, but we have definitely improved as a team from last season.”

Lower is scheduled to open the season Thursday at Ocean City.

After stepping up in competition following CAL realignment last season and finishing a solid 11-6-2 last fall, Middle enters the new season needing to replace much of its offensive firepower from last season.

Sophomore Kira Sides (F/MF) is the only returnee who scored more than two goals last season. She netted four and will be counted on for more in her second varsity season. 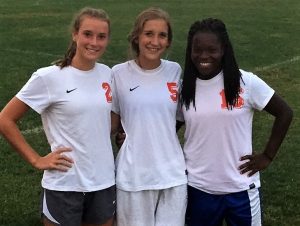 Kira Sides (left), Emma Stanford (center) and Nadine Coyle are the captains of the MTHS girls soccer team in 2017.

The other top returnees are junior Nadine Coyle (B), a first-team league all-star as a sophomore, and senior Emma Stanford (MF/B).

Others with varsity experience include sophomores Emily Mendel (B/MF) and Mia Rafter (B).

Among the newcomers, freshman Isabella Aftanis (F/B) is among the more highly touted rookie players entering the CAL. Other new varsity players expected to make an impact include junior Logan Thomas (B) and freshmen Morgan Adams (MF/B), Shelby Repici (B), Anna Bond (B) and Brynn Bock (GK).

“We’re rebuilding with a very young team in a competitive conference,” said 16th-year coach Bob Wishart, who’s 14 wins shy of 200 for his career. “We have some talented players but it will take them time to get used to the speed and physicality of the game.”

But Tori is back. 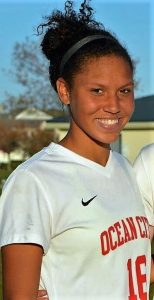 Junior Tori Rolls, who led the team in goals as a freshman and a sophomore, returns with 28 career goals and four assists. “Tori has that great mixture of speed, athleticism and intelligence,” Halliday said. Rolls will be the center of the forward attack and will be joined by senior Hannah Nathan and junior Natalie Stinson.

Junior Anna Devlin, who joined Rolls on the first team all-stars last year, will be at midfield along with sophomore Natalie Stinson and a trio of freshmen – Faith Slimmer, Kelsey White and Paige Panico.

Senior Haley Harper will key the defense and will be joined by juniors Alyssa Liebrand, Jordan Henry and Tanis McDonnell, who had eight shutouts as last year’s goalkeeper, and sophomore Delaney Lappin.

Sophomore Abbey Fenton has moved into the goalkeeper spot and has been impressive. “We love her back there,” said Halliday. “She makes our defense stronger.”

Ocean City won the National Conference last year but Halliday thinks it will be wide open this year. “It is hard to tell,” she said, “because some schools don’t have JV teams so you don’t know about the players moving up this year. But the conference games are always battles.

“Our team plays the game this year with a little more of a technical approach. We are a little more possession oriented. We also put together another strong non-league schedule that we hope will help us continue to grow.”

Ocean City opens at home Thursday against Lower Cape May.

Wildwood, as usual, is small in numbers but the Lady Warriors can lean on some experienced upperclassmen to carry the team as the younger players get more experience.

Leading the way are senior Michelle Lugo (GK/B) and junior Maddie McCracken (F), who will serve as captains. Lugo is a four-year starter while McCracken posted 14 goals as a sophomore last season. 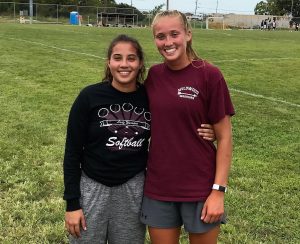 Others with experience include senior Mia Nocho (MF), junior Ava Vandepol (B) and sophomores Jeishka Hernandez (B) and Luz Ferrer (B).

“We don’t have a lot of soccer experience overall but if f all the pieces come together we can be really athletic and maybe we can put something together,” said 10th-year Wildwood coach Brad MacLeod.

Wildwood’s opener is Friday at home against Pennsville.

Wildwood Catholic was a respectable 8-9 last season with a team that was rather small in numbers. This season, the Crusaders will field a group that is on the young side, with many inexperienced players.

With that in mind, Wildwood Catholic will focus on trying to play strong defense in order to compete. 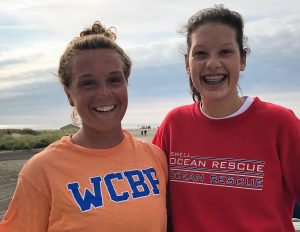 Julianna Roche (left) and Natalie Babore are the leaders of the Wildwood Catholic girls soccer team.

The top new players include freshmen Mia Caso (B), Marianna Papazoglou (B) and Riley Kane (MF).

“We have a very young team this year so I’m excited to see how our freshmen and other newcomers perform in their first year of high school soccer,” said fourth-year coach Kara Saunders. “This is a rebuilding year so we’ll be looking for individual growth and achievements and how well everyone meshes with each other. However the season goes, we want to have fun.”