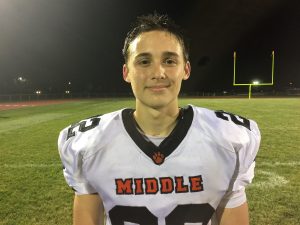 But when he did, he sure was effective.

Hayes ran for a pair of second-half touchdowns as the Panthers came back from an early deficit to post a 19-7 road victory. 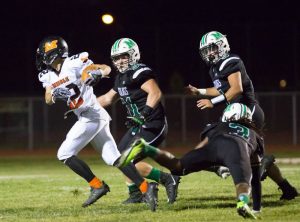 His 11-yard touchdown run late in the third quarter gave Middle (2-1) the lead for good and his 51-yard scamper to the end zone put the game away late in the fourth quarter.

Hayes finished with eight carries for 113 yards to go with his two scores.

Middle won the contest despite missing three key players due to injuries, including two-way lineman Austin Cominsky, who was dominating in the team’s victory over Steinert in its season opener.

“After losing like we did last week (50-0) I was very worried about getting the kids focused,” Middle coach Frank Riggitano said. “We had some situations in school and we had a few guys out so we were very, very concerned. But we had a great practice Thursday. Normally we just do a walk through the day before a game but I felt like we were a little behind so we laced them up and went full tilt for two hours and 15 minutes. It really was a great practice. The kids responded and we got a really big win here.” 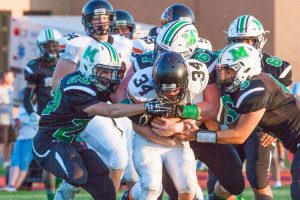 Middle Township’s Karl Giulian is wrapped up by the Mainland defense after a short gain. (photo courtesy David Weesner)

“We’re fortunate to get this win,” Riggitano said. “And now we have a win over a Group III team (Steinert) and a Group IV team (Mainland). Hopefully we can get a couple guys back next week and we can continue to build on this.”

Mainland (0-2) opened the scoring with 3:14 left in the first quarter on a two-yard touchdown run by junior Kobe Roberts, normally a running back but pressed into duty at quarterback due to injury.

Middle responded quickly. After a 34-yard run by Hayes, quarterback Cameron Hamer found Seth Loeffler for a 43-yard touchdown pass that tied the score at 7-7.

The teams combined for only one first down apiece over the remainder of the half. Middle recovered a fumble and got an interception from Karl Giulian that gave them the ball inside Mainland territory twice in the period but failed to capitalize. 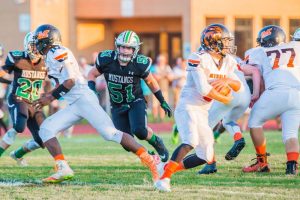 Middle then controlled the ball for nearly the entire third quarter. After stopping Mainland on downs at its own 18-yard line, Middle went on an 11-play, 82-yard drive that was finished off by Hayes with his first touchdown run. A 31-yard pass from Hamer to Mack Selby and runs of 10 and 13 yards by Hamer highlighted the scoring drive.

Mainland drove deep into Middle territory on its next possession but three penalties and a sack forced the Mustangs back toward midfield before they punted on fourth-and-24.

Hayes then sealed the victory with his long touchdown run on a third-and-five play with 1:32 to play.

Middle held Mainland to 218 yards of total offense. The Mustangs failed to gain a first down on four of their possessions.

“Our coaches did a super job of planning defensively for this week,” Riggitano said. “We knew their quarterback was injured but that kid (Roberts) is very talented. We were concerned about their ability to run it against us and their speed but for the most part we did a really good job against them.”

Hamer added 15 carries for 79 yards, many of them coming on quarterback sneaks through the middle of the Mainland defense. Hamer was also 4 of 9 for 106 yards through the air.

Middle is scheduled to host Buena in its next game on Friday. The game will be broadcast live on 98.7 FM.