Ocean City to add eight to Sports Hall of Fame

After a 15-year absence, the Ocean City High School Sports Hall of Fame will induct eight new members next month during ceremonies at the school.

Four athletes, three coaches and one team will become Hall of Famers on Sunday, Oct. 22. 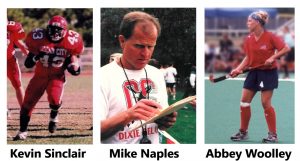 The team being inducted is the 1996 football team, which was the undefeated South Jersey Group 4 champion.

The ceremony, which will be free of charge, will take place in the William & Nancy Hughes Performing Arts Center at OCHS beginning at noon. Each new Hall of Famer will be introduced by a person of their choosing. Those already selected to the OCHS Sports Hall of Fame are also being invited to become part of the event, which will be hosted by John Bruno.

Following the induction ceremony, a catered reception will be held in the Ocean City High School cafeteria. Tickets to the reception are $20 and can be reserved by contacting Vince Leavey via email (vleavey@ocsdnj.org) or by calling the high school (609-399-1290).

The eight new Hall of Fame members will join those listed alphabetically in the chart below.