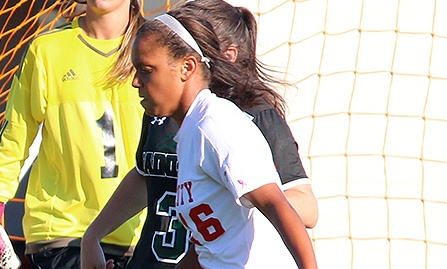 Rolls, who led OCHS scoring both as a freshman and a sophomore and was a first team all star, had scored the goal to give the Raiders a 1-0 lead. Shawnee tied the score in the second half and Rolls was on a breakaway when she was taken down hard. Observers were surprised no yellow or red card was issued but Ocean City was given a penalty kick. The Raiders did not score on the penalty kick but won the game when Faith Slimmer scored later.

“Tori is such an important part of our team we will have to re-group,” said Ocean City coach Kelly Halliday. “The Shawnee trainer actually cleared her to return and she went back onto the field. But, after running up and down once or twice, she stopped and looked to us on the sidelines. We could tell then that she was really injured. And the pain just seemed to get worse.” 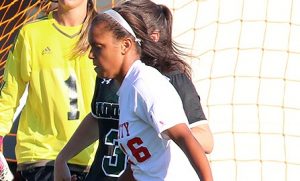 A broken collarbone can keep an athlete out of action for 4-8 weeks, which could mean Rolls will be lost to OCHS for the rest of the soccer season. She also is a key member of the Ocean City basketball and track teams. Her injury should not interfere with those seasons.

Saturday’s goal was the 29th of Rolls’ career, consisting of two seasons plus one game, so far.