RAIDER ROUNDUP: The fall is going great so far for OCHS teams 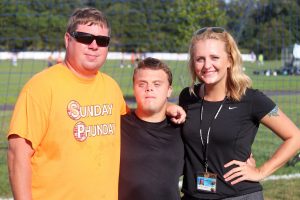 Joanne Balnis and her husband, Richard, had no visions of grandeur for their son, Jacob, when he joined the soccer program at Lower Cape May Regional High School.

“We were just hoping he’d be able to come out to practice with the team and maybe in some games he could run the balls (along the sidelines),” she said. “We really didn’t expect him to play. We just thought it would be great for him to be interacting with the other kids.”

Instead, Jacob has been providing some of the most magical moments the area has seen during this young fall high school sports season.

Jacob is a 16-year-old with Down syndrome who hails from Weymouth Township. He landed at Lower Cape May after being placed in the school by the State Department of Education, after the Buena Regional School District wanted to enroll Jacob in their area’s special services school.

“He was mainstreamed in middle school and we wanted to continue that,” Joanne said. “We were in search for a place and we found Lower Cape May and we really liked their program.”

It all started with a game against rival Middle Township early in the season.

“He had been playing a little bit in the game and their coaches just asked if we would mind it if they let him score,” Lower junior varsity coach Dan Keen said. “I thought it might be hard. It was the middle of the game and the kids were playing very hard. But then they realized what was going on and they just backed off and let him go in and score.”

Subsequent junior varsity games against Cedar Creek, Absegmai and Oakcrest played out in the same fashion, with Jacob finding the net in each game with the help of his teammates and the opposing players. He now has four goals.

“You put aside everything and all you think about is the fantastic sportsmanship these teams have shown,” Lower Cape May varsity soccer coach Dennis Elia said. “They put everything going on in the game aside just to make a kid’s day.”

Word began to get out about Jacob’s exploits when a professional photographer who has a son on Absegami’s junior varsity team snapped a picture of Jacob jumping into Keen’s arms after his goal against the Braves and posted it to her professional Facebook page.

“The first time it happened, it was so emotional for all of us to see him so happy,” Keen said. “And now every time he scores he reacts like it’s the first time for him. He’s just so excited.”

Elia and Keen both admitted they weren’t sure how Jacob’s participation would work out for all involved.

“But it’s been unbelievable,” Elia said. “He had a soccer background. When we found out his parents just wanted him to feel part of the team and get exercise and play with the kids, we knew right then this would end up being great. We’ve had no problem getting him in the games. He’s actually played a lot in some of them. The kids love him and the kids love him being here. He’s been unbelievable for our team.

“One of the important things is that we’re focusing on his athletic ability rather than his disability. The kids are seeing that, too.”

While on the assertive side on the field, Jacob quickly became quiet when approached by a reporter. He clung to the side of his one-on-one aide, Katie Damiana.

“Now all of a sudden you’re going to get shy on us?” Damiana asked Jacob with a laugh.

Jacob then opened up a bit.

Junior Patrick Moore, one of the standout players on the varsity team, was instrumental in getting Jacob to join the soccer program.

Senior Brett Favre called having Jacob on the team “a fun experience.”

“When he’s doing this he’s really excited,” Favre said, “so it’s exciting for us to see him having fun and enjoying it.”

Jacob, who is also part of the swim team at Lower Cape May, is the youngest of Joanne and Richard’s 11 children. Five are adopted.

“We almost named him ‘Ty,’” Joanne said with a laugh, “because we had five biological kids and five adopted kids and he broke the tie.”

It’s no surprise that Joanne and her husband are extremely grateful for what Lower Cape May has done for their son.

“We were on cloud nine when he got into the games,” she said. “We didn’t ask for that we didn’t expect that. The fact that they took such a risk, I think it says so much about the school and about the kids that go there. 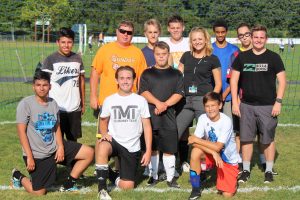 “We’d take him to practice over the summer and he’d get out of the car and all the kids were saying hello and calling his name. They watch out for him. When they do laps at practice a couple of them stay back with him and make sure he keeps up and they encourage him. They treat him like one of the guys.”

“We’re so happy to go from field to field and see all the kids and coaches out there showing such great sportsmanship,” she said. “All we hear about today is bad stuff but there are so many good people out there.”

Jacob is easily one of the program’s most popular players.

“He’s the life of the team, that’s for sure,” Keen said. “He makes everyone smile.”

There’s no question Lower Cape May did a good thing in letting Jacob Balnis play soccer.

It’s even better that the school, the coaches, the players and the opposing teams have made him feel included.