Brian Hindle, the second-year coach of the Lower Cape May Regional High School football team, is confident his team has made strides in the proper direction over the past 12 months or so.

Whether those strides mean improvement in the team’s final record remains to be seen, but there’s no question the Caper Tigers are much better equipped to compete than they were at the start of last season. 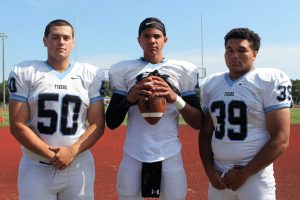 For one, there are nearly 60 players in the program, the most in years. It’s so many, that Hindle expects the program to play full junior varsity and freshmen schedules this fall.

“The numbers are really good and it’s great to see the change in that,” said Hindle, whose team finished 2-8 last season, with both victories coming over winless Wildwood. “To have almost 60 players out is great for a school like ours.”

Second, there is much more experience. There are approximately 15 to 20 players who saw significant varsity time last season.

That experience has led to crisper practices and better continuity, Hindle said.

“Our leadership has really improved,” the coach said. “Everyone’s bought in, everyone’s working very hard and everyone’s pulling in the same direction.”

Ray was more of a threat with his feet last season but he’s expected to make more plays with his arm this season. Hindle said Ray is drawing come college interest.

Cottrell, at 5-10, 225, is one of the top two-way players in the West Jersey United Division. Reilly is a solid two-way starter.

“Aaron Cottrell is a freak of a natural athlete and he’s a great leader, too,” Hindle said. “And Matt Riley’s really come on for us. The captains are definitely leading the way for us.”

The three captains are among the large group of returning starters (seven offense, eight defense).

The schedule does Lower Cape May no favors. The Tigers open with the DRBA Commissioners Cup game against Cape Henlopen on Saturday at home. Lower lost 49-12 to the same opponent in last season’s opener. Then it’s games in consecutive weeks against Absegami and Holy Spirit.

“The schedule is so tough but we’re going into every game preparing to win and preparing to compete,” Hindle said. “I believe there are a number of games we’re definitely going to be competing for a win. But it’s a tough schedule, especially at the start. To open with Group V Cape Henlopen and Group IV Absegami and then a powerhouse like Holy Spirit, that’s not easy for a program like ours. And then it’s still hard after that. If we can survive the first three games I think we can be OK from there.”