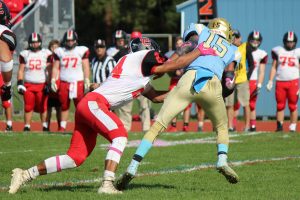 ERMA- Ocean City staked its claim to the proverbial Cape May County football championship today with a 49-7 win over Lower Cape May.

The win, the fifth straight by the Raiders, improved their record to 6-1. Lower dropped to 1-6. Ocean City also defeated Middle Township this year and Lower topped Wildwood, putting the Raiders at the top of the heap.

Robertson made it 42-0 when he brought the opening kickoff of the second half back 84 yards for a touchdown and, later in the third quarter, Alex Morales ran 22 yards with a Lower Cape May fumble for Ocean City’s final touchdown. Pfiefle now has 14 touchdowns this season and Robertson seven.

Keith Larkin kicked four extra points, Josh Rolls kicked one and Zac Clark caught a two-point conversion from Brandon Lashley to round off the Ocean City point total at 49.

Brennan Ray, Lower’s workhorse quarterback, romped 43 yards for a touchdown in the final minute of the third quarter to avoid the shutout. Freshman Matt Hays kicked the extra point.

Today’s win completes the first seven games for the Raiders and sets them up for the challenging remainder of the season. Next Friday, undefeated St. Joseph (8-0), ranked No. 3 in all of South Jersey, comes to Carey Stadium seeking the championship of the West Jersey Football League’s Independence Division. If St. Joe wins it is the champion. If OCHS comes up with the upset it would be a three-way tie for the division title between the Raiders, St. Joseph and Cedar Creek. Ocean City has lost its last nine games against St. Joe and last defeated the Wildcats in 1976.

After the game with St. Joe, Ocean City will play at least one Group 3 playoff game and then the surprising Pleasantville Greyhounds (6-1) on Thanksgiving morning.

The victory over Lower – plus Absegami’s win on Friday – gives Ocean City additional points in the NJSIAA power ratings that will determine which eight teams will play for the South Jersey Group 3 championship. The Raiders have clinched a playoff spot but Delsea – which has played in the South Jersey final the last five years, winning four – has passed them in the power ratings. That means Ocean City will probably open the playoffs on the road.

But next week’s games are very important and might change that. It looks like Delsea could get a power rating score as high as 102 points and Ocean City 101. If the Raiders upset St. Joe, they would move back ahead of Delsea and possibly even Lacey Township into the No. 3 seed. If they lose to St. Joe, they still might ease ahead of Delsea, with help from Oakcrest, Middle Township and Eastern.

EXTRA POINTS: … with this year’s playoff qualification, Ocean City has been a playoff team under seven different head coaches, the most by any public school in South Jersey … Keith Larkin’s four extra points keep him among the leading Cape-Atlantic League kickers. He is 24 for 27 kicking extra points this season … Ocean City has scored a defensive touchdown in each of its last four games … Brennan Ray has scored seven of Lower’s 14 rushing TDs this season … LCMR graduate Matt Szczur, now playing for the San Diego Padres, was in attendance at the game today … Lower Cape May did a great job with its homecoming ceremonies, including a creative cheerleader dance routine, a salute to a longtime school district employee who is a breast cancer survivor and a float competition between the four classes at the high school … a full box score and completed seven-game OCHS stats will be available at http://www.OceanCitySports.com on Sunday …