PHOTO GALLERY: Raiders have no problem in playoff opener 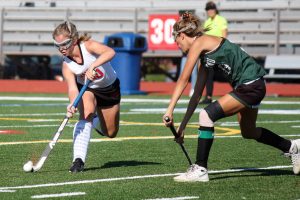 An hour or so later today, the OCHS boys soccer team (16-2-1) defeated Bridgeton, 8-0, to advance to a South Jersey quarterfinal game with Lacey Township (12-7-1) on Friday at 2 p.m. at Carey Stadium.

In the field hockey game, Junior Reese Bloomstead (above) scored three times in the second half to help Ocean City overcome a 1-0 Mainland lead at halftime. Bloomstead talks about the win in an exclusive video interview, below. The Mustangs scored in the first five minutes when Brianna Berretta hit the back of the net. That goal held up until OCHS freshman Tara McNally scored with 25 minutes left in the game. Bloomstead then scored, followed by a Haleigh Flukey goal and two more by Bloomstead. Berretta actually scored her second goal of the game after Flukey had scored to bring Mainland within 3-2 but Bloomstead then put the game away.

The winner of Thursday’s game at Clearview will face the Central Jersey Group 3 champion – probably Moorestown (13-3), the No. 4 ranked team in New Jersey – on a neutral field next Tuesday.

In boys soccer today, Trevor Paone, Luke Varallo and Hunter Paone each scored in the first half and Ocean City coasted from there. Varallo and Hunter Paone added second half goals, Anthony Inserra scored twice in the second half and Sean Zellers added a goal. Josiah Nistorenko assisted on five of the Raiders’ goals. Nistorenko has 20 assists this season, second in South Jersey and the eighth highest total in the state. Garrett Vliet, Brian Calderon and Chase Jones combined to shut out the Bulldogs.

Kelly Halliday’s girls soccer team (17-3) will play Thursday at 2 p.m. against Gloucester Tech (12-7-2) in the Group 3 quarterfinals at Carey Stadium. The winner will advance to the South Jersey semifinals against either Deptford or Lacey. OCHS is the No. 1 seed, so all of its games in the South Jersey tournament will be at home. The Raiders have won one South Jersey title in girls soccer, in 2000.

On Friday, Kevin Smith’s football team (6-1) will put its five-game win streak on the line at Carey Stadium (6pm) against St. Joseph (8-0), the No. 3 ranked team in all of South Jersey. If St. Joe wins, it will win the West Jersey Football League’s Independence Division championship. Should the Raiders win, they would finish in a first place tie with St. Joe and Cedar Creek. An OCHS win on Friday would also likely give the Raiders a home game in the first round of the NJSIAA playoffs.

The week finishes with the undefeated Ocean City cross country teams running in the NJSIAA South Jersey Group 3 Meet at Delsea on Saturday afternoon. The OCHS boys have won five South Jersey championships, including four straight from 2007-10. The girls have won eight, the last in 2013.