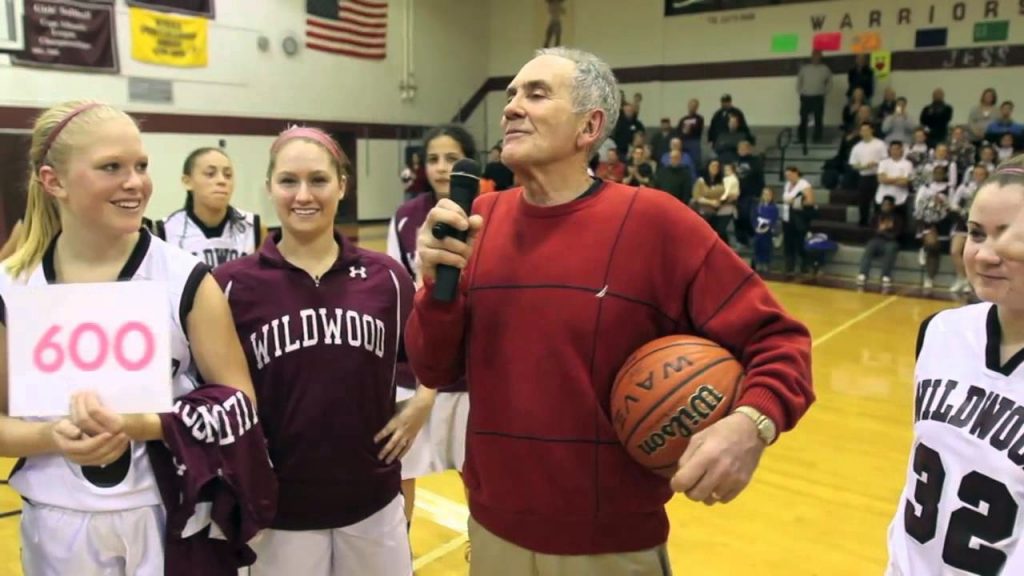 Troiano has had such an impact on the area basketball scene that the ball is starting to look like him.

This guy has been around since Buddy Tarbotton was a boy.

In 39 seasons his Wildwood girls basketball teams won 682 games – 433 when they were part of the Cape-Atlantic League and 249 since they started taking 60-minute bus rides in the Tri-County Conference.

He has won more games than any South Jersey girls basketball coach in history.

He’s an intense coach on the sidelines but a friendly, affable guy with a quick smile and a good sense of humor when the Warriors are not playing.

It is true that he roots for the Pirates and the Steelers but you really can’t blame him for that. He grew up in Pittsburgh and Pittsburgh is one of two cities (the other is Tampa Bay) that has a pro football team, baseball team and ice hockey team but no basketball team.

There have been more tributes to Troiano in Wildwood than Bruce Springsteen sightings. During one of them, following one of his four state championship seasons, some prominent people in the sports community offered their feelings about why he has been so successful.

South Jersey basketball Hall of Famer Fran St. John: “Dave has done a great job. One of his greatest talents is his ability to adapt and get his players to adapt. He can win with superstars and he can win without them.”

Burlington City athletics director Roy Wright: “Dave has a certain knack that gets kids to perform. He gets his kids to play over their heads. They are always prepared. And he is always involved with them. In fact, it’s not just his kids that he cares about. He cares about people. He was the first person to call me when I got the job at Lower. He is the best.”

Former Wildwood principal Walt Dull: “Mr. Troiano does the stuff I grew up with. He is disciplined, fair, funny and challenging. He is a great teacher and a great person. There is not a minute wasted in practice. In this time when everybody resists being a role model, he is role model. He knows where his players are 24 hours a day. When a kid needs something, he knows it. But he draws a line in the sand. He remains the coach and teacher. The kids probably know he’s just growling sometimes but they also know he’s saying something they should hear. And, like the other successful coaches I have known, he surrounds himself with great assistants and lets them do their jobs.”

Stockton University coach Joe Fussner: “As an observer and former high school coach, I think the fact that Dave has stayed at Wildwood and developed loyalty is important. He gets that back from the players, the school and the community. His players always play hard for him. And, when he has had special talents he has been able to integrate the rest of the players to create a team that can set high goals that are reachable.”

Former coach Larry DiGiovanni: “Dave teaches strong, fundamental basketball at both ends of the court. He takes the talent he has and puts those players into situations where they can be successful. It is a great skill.”

Former coach Sam Botta: “In my years at Egg Harbor Township, there are several things that stand out to me about why Dave has been so successful. First, his teams were always well-drilled and played

excellent defense. Also, they would make you pay for mistakes, whether you made them at the offensive end, defensive end or in transition. Most importantly, I believe no matter what the level of talent Dave had in a given year, he was able to maximize his team’s potential. Some coaches excel when they have a lot of talent, some coaches excel when they have less talent. Dave Troiano excels with any team.”

That is what his peers said 16 years ago, what they have said since and what they continue to say.

Dave Troiano won with some great individual players and he won with teams filled with role players.

But those are just the victories on the court. Troiano’s lessons about overcoming obstacles and never giving up have been used by his former players throughout their lives.

The high school basketball season will begin in a little over seven weeks in New Jersey and it will go on without Dave Troiano.