CoastSportsToday.com Athlete of the Week: Will Berger, Lower Cape May 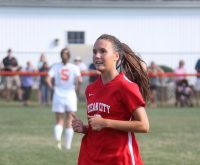 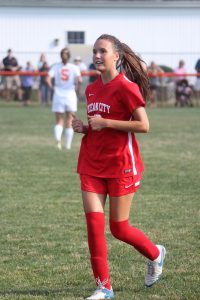 Freshman Faith Slimmer (above) scored a pair of second half goals to build on a 1-0 halftime lead and put the Raiders in control. Both of Slimmer’s goals came off assists from junior Natalie Stinson, who added Ocean City’s final goal with an assist from senior Hannah Nathan. The actual game-winner in the first half was scored by sophomore Delaney Lappin, assisted by Slimmer.

Sophomore Abby Fenton stopped two Central shots to record her 13th shutout of the season, tying the school record set by Brittany Cates in 1995. The Ocean City defense was in control throughout, not allowing Central a single corner kick.

The win moves Kelly Halliday’s team into the second round where it will play the winner of the Absegami-Gloucester Tech game that was moved to tomorrow (Tuesday) because of wet grounds. That second round game will be played Thursday at 2 p.m. at Carey Stadium. The winner will advance to the South Jersey semifinals, probably against either Deptford or Lacey. OCHS is the No. 1 seed, so all of its games in the South Jersey tournament will be at home. The Raiders have won one South Jersey title, in 2000.

Today’s win is just the beginning of a big week for the OCHS fall teams, who entered the week a combined 77-21 this fall with four Cape-Atlantic League conference championships.

Tomorrow at 2 on the Carey Stadium turf field, the OCHS field hockey team (13-7) will host Mainland in a Group 3 second round game. The two teams split during the regular season. Ocean City defeated Timber Creek, 5-1, and Mainland topped Winslow Township, 4-0, in first round play. The winner of tomorrow’s game will face either Clearview or Absegami in the South Jersey final on Thursday. If No. 1 seeded Clearview wins the other semi, it will host Thursday’s final. If Absegami wins, either Ocean City or Mainland will host the final. OCHS has won 15 South Jersey championships in field hockey, including the last five.

At 3 p.m. tomorrow, the OCHS boys soccer team (15-2-1) will host Bridgeton at the Tennessee Avenue Complex. If the Raiders win that game, they will play either Seneca or Lacey on Friday afternoon in a second round Group 3 game. Aaron Bogushefsky’s Ocean City team is seeded No. 1 and will play all South Jersey games at home. OCHS has won 10 South Jersey titles in boys soccer, the last one in 2014.

On Friday, Kevin Smith’s football team (6-1) will put its five-game win streak on the line at Carey Stadium against St. Joseph (8-0), the No. 3 ranked team in all of South Jersey. If St. Joe wins, it will win the West Jersey Football League’s Independence Division championship. Should the Raiders win, they would finish in a first place tie with St. Joe and Cedar Creek. An OCHS win on Friday would also likely give the Raiders a home game in the first round of the NJSIAA playoffs.

The week finishes with the undefeated Ocean City cross country teams running in the NJSIAA South Jersey Group 3 Meet at Delsea on Saturday afternoon. The OCHS boys have won five South Jersey championships, including four straight from 2007-10. The girls have won eight, the last in 2013.