WILDWOOD – In a game in which the Lower Cape May Regional High School football team beat local rival Wildwood, 58-0, the Caper Tigers were actually having trouble with their opponent for much of the first half.
“Our game plan was working,” Wildwood coach Ken Loomis said. “We were hanging in there.”
Wildwood trailed by just 6-0 and twice had possessions that moved into Lower Cape May territory in the latter part of the first quarter and the early part of the second quarter in Saturday’s game. 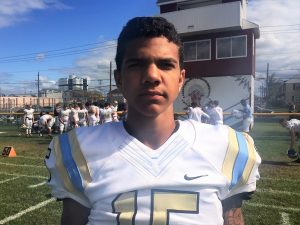 But then Lower Cape May’s Darion Lamar turned the game’s momentum to his team for good.
Lamar’s 65-yard return of an interception with a little more than five minutes to go in the second quarter gave Lower Cape May the ball at the Wildwood 10-yard line. Lower quarterback Brennan Ray ran it in from there on the next play for the second of his three touchdown runs to extend the Tigers’ lead to 12-0.
“That (interception return) was definitely a spark for us,” Hindle said. “I thought our defense played pretty tough the whole game.”
Another interception and a fumble on a kickoff return led to two more Lower Cape May touchdowns as the Tigers quickly built a 25-0 lead at the half en route to the lopsided victory.
“We had some opportunities early but we couldn’t finish,” Loomis said. “That’s been the story of our year so far. Take one step forward and two steps back. It’s something we have to work on.”
Lower Cape May (1-3) dominated the second half, scoring four more touchdowns. The Caper Tigers forced a whopping eight Wildwood turnovers on six interceptions and two fumble recoveries.
“We came in here wanting to play to our potential and we didn’t open the game playing to our potential, so we have some things to work on,” Hindle said. “But I don’t care what the score says, you have to give Wildwood credit. They have, what, maybe six kids (as substitutes) on their sideline? And they fought the entire game. For most the first half they were a very tough team against us.”
In addition to his three touchdowns, Ray rushed 13 times for 80 yards. He only attempted a couple of passes in the game, partly due to a minor injury he suffered to the thumb on his throwing hand after he got it caught in a helmet during a play early in the game.
“Our line did a good job blocking, helping us find holes and score some touchdowns,” Ray said. “We came out strong. Props to Wildwood for coming out strong but we were able to pound it at them.”
Fullback Aaron Cottrell led the ground attack for Lower, running 14 times for 133 yards and two touchdowns.
In addition to his interception, Lamar also rushed for two touchdowns. Eric Konczyk also ran for a score. Jonas Lumbruno added two interceptions, Tony Kapurelos ran an interception back 40 yards for a touchdown and Dominic Bowman and Dennis Cluff also each picked off passes.
Nate Lopez caught three passes for 52 yards and Vito Hernandez and Ah’Shawn Jones each added two receptions for Wildwood (0-3).
— story by Brian Cunniff; videos by Matt Ulmer