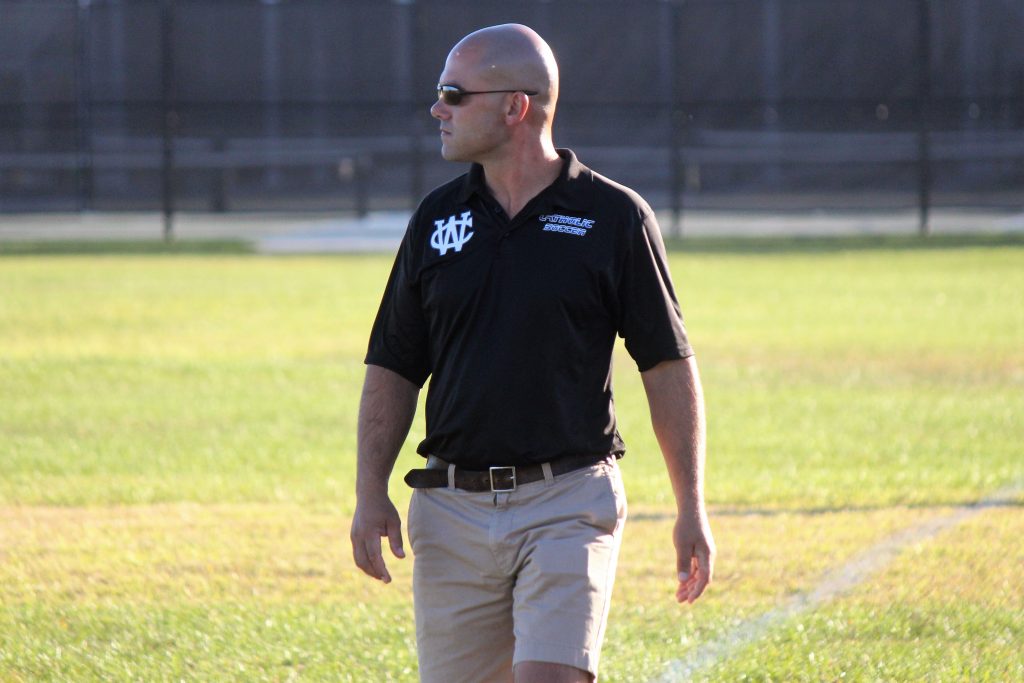 A 4-0 victory by the Crusaders not only kept the team unbeaten in Cape-Atlantic United Conference games but it also gave 10th-year head coach Mike Saioni his 100th career victory.

Saioni, a 1998 graduate of Wildwood Catholic and one of the boys soccer program’s all-time greats as a player, improved to 100-67-8 for his career.

Saioni, not surprisingly, downplayed the accomplishment.

“More importantly, we’re 7-3 and that helps us because we’re trying to get a top seed in the state tournament,” he said. “Above everything, it’s a win and the power points we got from it are more important than a 100th victory.

“When I think about 100, it makes me feel like, ‘Where has the time gone? Have I really been doing this this long?’ But it’s a great accomplishment for the school and for the program. But for me personally, I’m more concerned with getting wins for power-point purposes to get a high seed and get some home games for the state tournament.”

Irving Fenochio netted a hat trick, Tyler Mericle added a goal and Mike Sharkey recorded the shutout in net for the Crusaders, who sit in first place in the United Conference at 7-0 in conference games.

Following the game, the team unfurled a banner congratulating its coach. He was also presented with a plaque and a commemorative ball.

“There were some really, really kind and wonderful gestures made, and a lot of the parents and spectators came over the congratulate me,” Saioni said. “I wasn’t expecting much. I was treating this as another game and I wasn’t expecting any pomp and circumstance with the win. But the extent to which people have gone to celebrate this is incredibly meaningful to me. The outreach from out Wildwood Catholic family has been beautiful.”

As a player at Wildwood Catholic, Saioni was one of the Cape-Atlantic League’s top defensive players. He was part of three South Jersey championship teams and scored 22 career goals.

Saioni scored perhaps the most memorable goal in program history as a senior in the South Jersey Parochial B championship game. His stunning free kick strike from 20 yards resulted in a last-gasp equalizer for the Crusaders, who went on to beat St. Augustine Prep in extra time to win the championship. Saioni was named first team Parochial all-state as a senior.

Saioni went on to play four years of college soccer at Division I Lafayette College, where he served as a two-year captain, was named the team’s Most Valuable Player as a senior in 2001 and helped the Leopards win three regular-season Patriot League titles.

He later went on to serve as an assistant coach first at St. Francis College and later at Iona University before returning to Cape May County.

Saioni became the head coach at Wildwood Catholic prior to the 2008 season. He also coaches in the Cape Express youth soccer program.