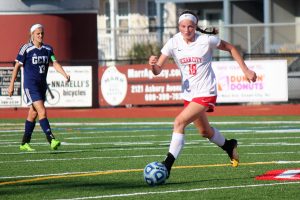 Elsewhere on COAST SPORTS TODAY, Brian Cunniff has a photo gallery and video from the girls soccer victory.

Also this afternoon, the OCHS field hockey team lost to Clearview, 1-0, in the South Jersey Group 3 championship game. It marked the 10th straight time that Ocean City (14-8) had played in the title game, winning the previous five. Clearview scored off a corner halfway through the first half and played tough defense throughout. OCHS goalkeeper Maddie Kahn made some strong saves to keep the Raiders in the game until the end.

Aaron Bogushefsky’s soccer team will play Lacey Township (12-7-1) in a South Jersey Group 3 quarterfinal. The winner will advance to the semifinal round against either Hammonton or Delsea on Tuesday afternoon. The Raiders are seeded No. 1 so the game will be played in Ocean City if they win. OCHS has won 10 South Jersey titles in boys soccer, the last one in 2014.

Kevin Smith’s football team will put its five-game win streak on the line tomorrow night against St. Joseph (8-0), the No. 3 ranked team in all of South Jersey. If St. Joe wins, it will win the West Jersey Football League’s Independence Division championship. Should the Raiders win, they would finish in a first place tie with St. Joe and Cedar Creek. An OCHS win on Friday would also likely give the Raiders a home game in the first round of the NJSIAA playoffs.

This big week finishes with the undefeated Ocean City cross country teams running in the NJSIAA South Jersey Group 3 Meet at Delsea on Saturday afternoon. The OCHS boys have won five South Jersey championships, including four straight from 2007-10. The girls have won eight, the last in 2013.

But a second week of NJSIAA action is also assured with the girls soccer team playing Monday and the football team in action either Friday or Saturday.