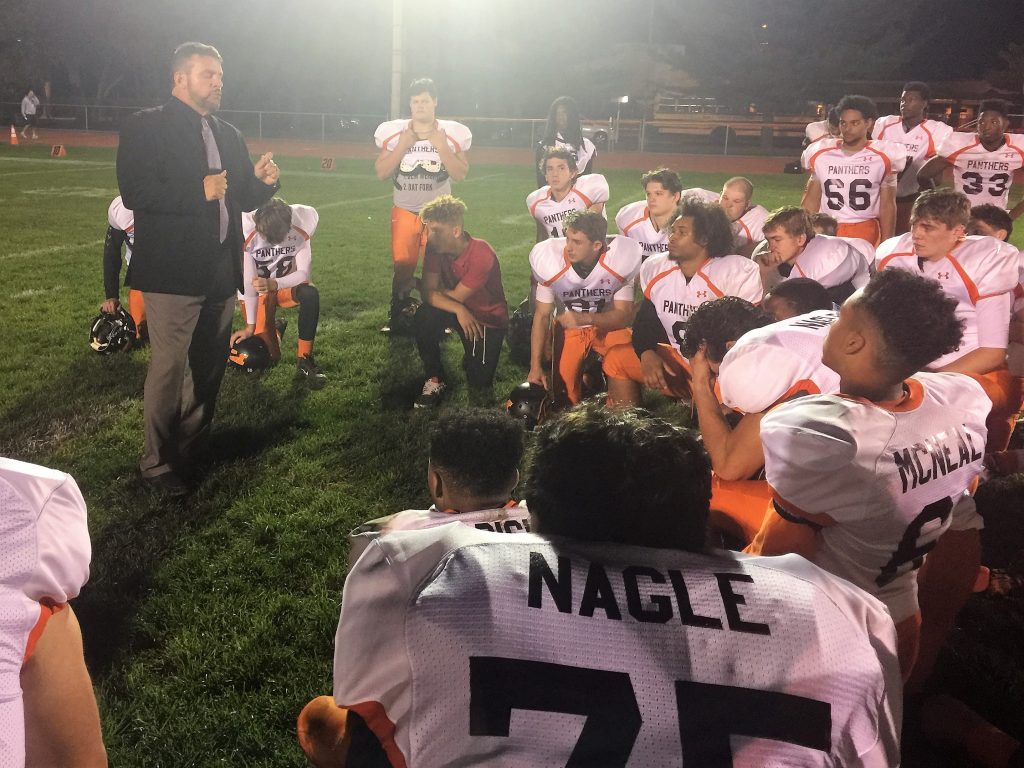 Middle Township football coach Frank Riggitano addresses his team after a 6-0 loss to Pleasantville. The Greyhounds had been averaging 41 points per game entering the contest.

They got just six against Middle.

But still won the game.

Mohamed Toure’s 53-yard run – Pleasantville’s only real big play of the game – set up Toure’s two-year touchdown run one play later for the game’s only scoring as the Greyhounds escaped with a 6-0 victory and qualified for the South Jersey Group II playoffs.

Middle will play a consolation game Thursday at home at 6 p.m. against Delran.

“I have no doubt that if we play like we did (against Pleasantville) then we’re going to win our last two games and finish 5-5,” Middle coach Frank Riggitano said.

Middle, still shorthanded due to a variety of injuries, played its best defensive game in quite a few seasons in limiting the high-powered Greyhounds (7-1). The Panthers sacked quarterback Sahmir Jones five times and for the part held Toure in check.

Middle even had a chance to go ahead in the contest late, using 12 plays to drive to the Pleasantville 6-yard line with less than five minutes to play. But two rushes that netted minus-two yards, an incomplete pass and a sack ended the threat.

“This one hurts,” Riggitano said. “It was easy to tell how bad the kids wanted to win. That’s a (Pleasantville) team that scored 66 points last week. To hold them to six points, we just played phenomenally on defense.

“Hopefully we can build some momentum off of this and finish strong.”