Raiders stop Pleasantville with no time on the clock to win, 34-32

TOM WILLIAMS COLUMN: A day of football that deserves thanks 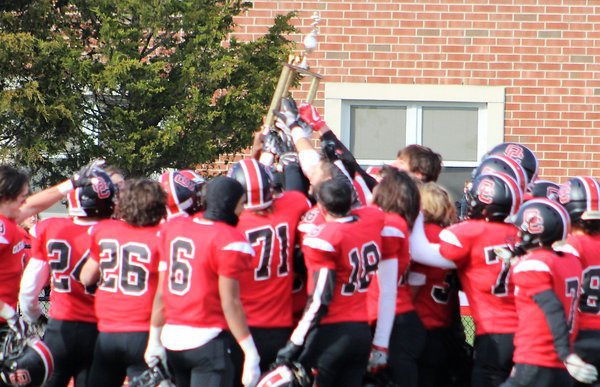 No, not the conversation around the dinner table –New Jersey’s new governor, the Eagles winning streak or the latest Presidential tweet.

How about that high school football!

There were only five games on Thanksgiving this year. Oakcrest and Absegami decided to play on Wednesday night so the coaches and players could spend more time with their families. Any guess about how many of those coaches and players went to high school game on Thursday morning anyway?

St. Joseph no longer plays a Thanksgiving game. Neither does St. Augustine, or Cedar Creek, or Bridgeton, or Buena, or Wildwood.

They all have their reasons. But those five games that were played before the turkey, stuffing and pumpkin pie were served created some special memories.

For example, Vineland defeated Millville for the second straight year, using four touchdowns by the versatile Isaih Pacheco for a 28-18 win that created a three-way tie for the West Jersey Football League’s Continental Division. The Fighting Clan will share that title with Millville and St. Augustine.

There was no scoring at all in the first half of the Mainland-Egg Harbor Township game. Zero. Zip. But EHT scored 41 points in the second half and walked away with a shutout victory. EHT, which played a challenging schedule (five of its first eight opponents were playoff qualifiers), scored 74 points in its last two games after scoring only 44 in the first eight.

The other three games all were decided in the last minute.

Atlantic City scored all five touchdowns in the air and then stopped a Holy Spirit drive in the final minute to upset the Spartans, 36-32. Mike Costabile threw four of those touchdowns to finally sit down to Thanksgiving dinner with a smile. As a sophomore at Holy Spirit he struggled in a loss to Atlantic City and, although Holy Spirit won last year, Costabile was hurt in the first quarter and did not return. This year, after transferring down the Black Horse Pike to ACHS, he finished with a big, big game.

Lower Cape May had not beaten Middle Township in five years but the Tigers jumped out to a 14-0 lead before most of the fans had been seated. Middle came back to take a 20-14 lead but Brennan Ray, one of those football players who does it all for his team, scored from two yards out with 14 seconds left to tie the game and freshman Matt Hays kicked the winning point.

And at Carey Stadium, Ocean City and Pleasantville battled all day. The Greyhounds had a chance to top off a special season in the final seconds. Pleasantville won seven games this year after winning seven total games over the last seven seasons. A TD pass from Sahmir Jones to Brian Stalworth with all zeroes on the clock brought Pleasantville within two points. The attempt for the two-point conversion was stopped just inches short.

Another bit of trivia. In three of the five games on Thanksgiving the first TD was scored on a TD pass from one quarterback to another. Mike Costabile connected with Nazim Derry for Atlantic City, Sahmir Jones hit Le’quai Athill for Pleasantville and Matt Harris threw to Elijah Nichols for Millville.

As a result of all this, Vineland and Millville will get division championship trophies, Lower Cape May will display the Anchor Bowl trophy for the next year, the Kiwanis Club trophy will move to EHT, Atlantic City will display the John Boyd-Stan Marczyk Memorial Award and the Mike Slaveski-Bob Thomas Memorial Award will remain at OCHS for at least another year. 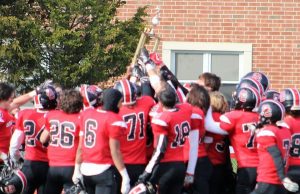 Thanksgiving is always a special time and high school football is a big part of it. Sometimes it doesn’t matter how the games turn out, it’s all about alumni getting together on a day when people return home.

But this year the games were really something to remember.