Ocean City High School’s teams had a lot of success in 2017.

The Raiders won the Ed Byrnes All Sports Award for the 2016-17 school year and had a terrific fall season to start the next school year.

OCHS was fortunate to have many of those special athletes.

Among females, there was senior Mickey Baker, an all star runner in cross country and a key basketball player. She contributed to two South Jersey champions in the same year, a rarity.

Junior Danielle Donoghue, who leads the Raiders in scoring through the first six basketball games, was an all star in lacrosse in addition to her basketball contributions.

Senior Shannon O’Reilly, committed to LaSalle, was also a lacrosse all star plus a field hockey all star, though her hockey season was shortened by injury.

Senior Ryann Styer, committed to South Carolina, has been a swimming all star her first three years and is one of the best freestyle swimmers in New Jersey.

Senior Maggie Wallace, committed to Indiana, is also a multiple year swimming all star and one of the state’s top swimmers.

And Alexa Weber, committed to St. Joseph’s, was one of the best distance runners in South Jersey and a multiple season all star in cross country and track.

Impressive on the male side were senior Liam Bergman, with more than 1,000 career rushing yards in football plus success in both indoor and outdoor track.

Andrew Donoghue, who graduated in June and is at The College of New Jersey, an all star in basketball and baseball.

Senior Korey Greene, a consistent runner in both cross country and track and a multiple year all star.

Luciano Lubrano, who graduated and is now at Cumberland County College, an all star and 1,000-point scorer in basketball and all star in track.

Senior Issac Robertson, a starter in baseball and all star in football who has emerged as the No. 2 scorer on the current basketball team.

And Jesse Schmeizer, committed to Lafayette, a multiple year all star in both cross country and track.

These are special athletes who were big reasons for the Ocean City success. But there are two more.

Amanda Nunan, a graduate now at Tennessee, was the best girls swimmer in the state for two straight years. She set meet records in the NJSIAA Meet of Champions and the state group finals. At Tennessee, she has already won the 1,000-meter freestyle against Louisville and finished fourth in the 1,650 free against some of the best swimmers in the nation in the Tennessee Invitational.

Senior Harry Pfeifle missed the football and basketball seasons of his junior year after knee surgery. But he returned in the spring to earn a second all star selection in lacrosse. Then, as an all star in the fall, he became the first OCHS quarterback to scored 16 touchdowns in a season and run for over 800 yards. He also is part of the rotation on the basketball team. 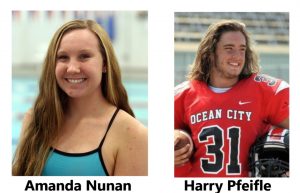 There were a lot of good athletes representing Ocean City High School during the year that ends today. Amanda Nunan and Harry Pfeifle were the best of them.

The 55th annual Ocean City Sportsperson of the Year will be announced on Tuesday.