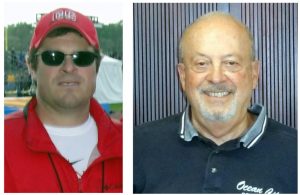 Purdue received the NJSIAA sports award for cross country along with Glenda Calabro of Jackson Memorial High School. Purdue has a career record of 91-1 in his 10 seasons as the OCHS coach. His team completed the 2017 season with an 89-meet win streak. His Raiders have won 10 straight Cape-Atlantic League titles, nine county championships and three South Jersey crowns. His teams have also finished second five times at the South Jersey meet.

Birnbaum’s boys and girls tennis teams won 662 matches in his 46 seasons as head coach, the most wins by any OCHS coach in any sport. His boys were 441-205 record in 31 years, including 10 Cape-Atlantic League titles and five South Jersey championships. The girls were 221-101 in 15 seasons, winning four more South Jersey titles. Birnbaum, who was inducted into the Ocean City High School Sports Hall of Fame in October, was also recognized for the many years that he and fellow honoree Stan Friedman directed the NJSIAA state tennis tournaments.

Those from this area who were previously inducted into the NJSIAA Hall of Fame include Dixie Howell of Ocean City, Art Marinelli of Egg Harbor Township, John Casadia of Vineland, Cathy Rush of Oakcrest and Bill Gordon of Ocean City and Rancocas Valley.

The ceremony was held at the Hamilton Manor in Mercer County.