VIDEO: Bouncing back from loss, Middle wins twice at Classic 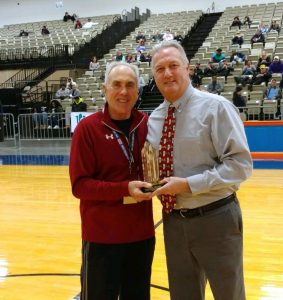 Dave Troiano (left) of the Boardwalk Basketball Classic presented an award to OCHS coach John Bruno for his loyalty to the event. Tuesday night’s game was the Raiders’ 74th in Wildwood under Bruno.

WILDWOOD- Ocean City High School’s basketball teams continued to roll today with wins over teams from out of state.

Paul Baruffi’s undefeated girls team (5-0) defeated Pennsylvania’s Hatboro-Horsham, 56-33, to advance to the championship game of the GWITDA Bracket of the Boardwalk Basketball Classic.

And John Bruno’s boys (4-1) topped Delaware’s Conrad School of Science, 61-45, to move into the championship game of the Ray Martin Memorial Bracket.

The two OCHS teams will virtually play their championship games back to back Wednesday night, though on different courts. The girls will meet Methacton PA (4-5) at 6:45 and the boys will play Millville (4-1) at 8:30.

The Ocean City girls jumped out to a 17-4 lead after one quarter against Hatboro-Horsham and controlled the action from there. Sophomore Emma Finnegan led the Raiders with 15 points. Kilie Wyers scored 10 with Danielle Donoghue scoring 10 points, grabbing seven rebounds, making eight steals and tossing three assists.

The Raider boys led for most of the game, forcing Conrad into 19 turnovers. Senior Jake McQuarrie scored a career-high 19 points on 7-for-9 shooting. He scored 10 of his points in the third quarter and also had four steals. Issac Robertson and Luke Varallo each added 14 points. Ocean City made 58 percent of its shots while winning its fourth straight game.

FREE THROWS: Both OCHS teams return to National Conference play on Jan. 3 against Absegami – the girls in the Dixie Howell Gym at 6pm and the boys in Galloway Township at 7pm …. box scores, schedule, results, stats and more are available at http://www.oceancitysports.com/OCDiary.html.