OCHS girls basketball team at home on Friday and Sunday 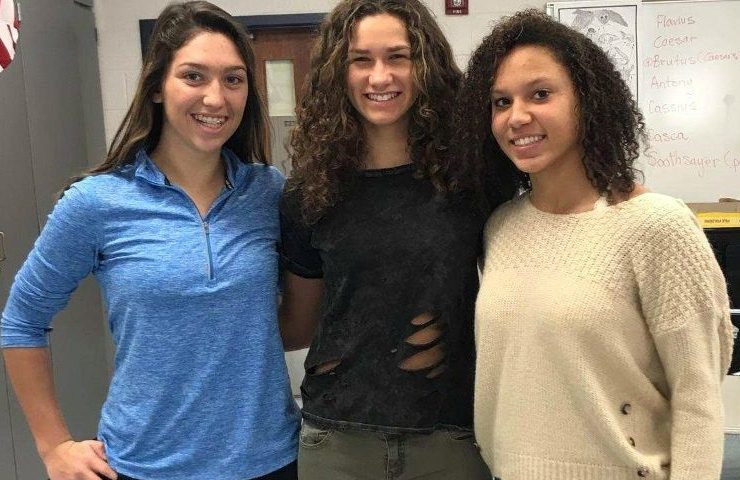 Danielle Donoghue (left), Mickey Baker and Tori Rolls are three of the players on this year's OCHS basketball team who are all stars in other sports.

Baruffi (355-100 in 16 seasons) has guided his teams to back-to-back South Jersey titles and three straight years of championships within the Cape-Atlantic League. His teams have won six South Jersey championships and a state title.

But what Baruffi has this year is a team loaded with athletes who are all stars in other sports. The group includes senior Mickey Baker (cross country), juniors Tori Rolls (soccer) and Danielle Donoghue (lacrosse) and sophomores Abbey Fenton and Delaney Lappin (soccer), to name a few. 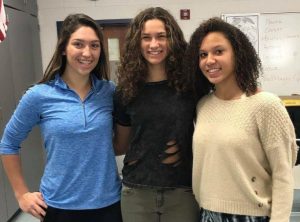 Danielle Donoghue (left), Mickey Baker and Tori Rolls are three of the players on this year’s OCHS basketball team who are all stars in other sports.

“I love that they are competing in other sports,” said Baruffi, “but it does cause us to take a little longer to get in full basketball mode. In the pre-season we have been inconsistent, especially on offense, but I think this team will get better every day during the season.”

Baker is the only returning starter, averaging 5.8 points and 5.0 rebounds a game last year. She is joined by four players who gained experience off the bench last season – senior Kilie Wyers, juniors Donoghue and Rolls and sophomore Emma Finnegan. Fenton and Lappin, fresh off their South Jersey title in soccer, will be the first two off the bench at the start of the season and junior Savanna Holt, a transfer from Holy Spirit, will join the rotation after she sits out the NJSIAA required 30 days.

“We have a bunch of other girls who will play and contribute as the season progresses, Baruffi said. “I expect us to develop into a pretty deep team.”

The Raiders streak of three straight conference titles could be challenged by Mainland, expected to be one of South Jersey’s best teams. In addition, the Raiders will play Paul VI, Lenape, Wildwood and Toms River North – plus a couple of out-of-state teams in Wildwood’s Boardwalk Basketball Classic.

“We try to challenge the girls so that we are at our best late in the season when championships are won,” Baruffi said.

FREE THROWS: Assisting Baruffi again this year will be Mike Cappelletti, Tim Kelley and Jeff Sobrinski …. The Raiders will play four girl-boy doubleheaders this year. The first is Sunday in the Ocean City PBA Tipoff Weekend (5:15) when the girls play Atlantic Tech and the boys face Pleasantville. Later, there will be a home girl-boy doubleheader with Clearview on The Butch Gleason Memorial Coaches vs, Cancer Night and another with Wildwood. In addition, OCHS will play a girl-boy doubleheader with Mainland during the Battle by the Bay in Atlantic City High School …. Ocean City opens the season Friday night at home against Middle Township, the team they beat in last year’s CAL championship game …. schedule, results, stats and more are available at http://www.oceancitysports.com/OCDiary.html.