Caleb Fields of Wildwood Catholic is the CoastSportsToday.com Cape May County high school boys basketball Player of the Year. 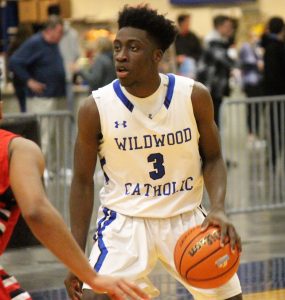 Wildwood Catholic High School boys basketball coach Dave DeWeese was quick to credit all of his players after a comeback victory on the road Wednesday.

DeWeese, however, was especially pleased with one in particular.

“We have Caleb,” DeWeese said, “and he was a man tonight.”

Senior guard Caleb Fields scored 23 of his game-high 33 points in the second half as Catholic rallied from an eight-point halftime deficit to post a 66-58 victory over St. Joseph in an important Cape-Atlantic United Conference contest.

“Caleb took complete control of the game in the second half,” DeWeese said.

Wildwood Catholic started the third quarter on a 13-4 run to take a one-point lead and never trailed again, although St. Joe did remain close throughout the remainder of the game.

“We weren’t happy with the way we played in the first half,” DeWeese said. “We were very passive and (St. Joe was) very aggressive and at halftime we talked about trying to flip that around. Some of our kids really stepped up in the second half and really got after it, especially in that third quarter. We were able to take control of the game.”

The Crusaders were excellent at the foul line down the stretch. Fields finished the game 11 for 12 from the line, making each of his last six attempts.

“We always say that any win at St. Joe is a good win,” DeWeese said. “It’s a very difficult environment to go into and win a ball game, no matter what the rankings are or what the records of either team are. Their kids played hard for 32 minutes every game. They’re very aggressive, very physical and they have some very skilled players as well. For us to go up there and get a conference win against them is huge.”

Taj Thweatt added 12 points for the Crusaders. Two came on an emphatic put-back dunk in the third quarter. Charles Fields chipped in 10 points.

Wildwood Catholic has another conference game Friday against Middle Township at home.