Danielle Donoghue is presented with a gift certificate from Top of Crop by John Rodio after being named the game MVP.

The Raiders were supposed to play at Atlantic City Monday night but there was some storm damage to the Atlantic City gym and the game was postponed.

Lenape never led after the first quarter but the Indians stayed close, largely because of the five three-pointers they made. But Lenape had the unusual handicap of never going to the foul line during the entire game. Ocean City was just two of six from the line.

Lenape got to within two points with just over five minutes left in the fourth quarter but Danielle Donoghue fed Mickey Baker for a layup; Donoghue drove the length of the court, scored and was fouled, completing the three-point play; and Tori Rolls rebounded and fed Emma Finnegan for a layup. The Raiders had scored seven unanswered points in less than a minute and had control of the outcome. 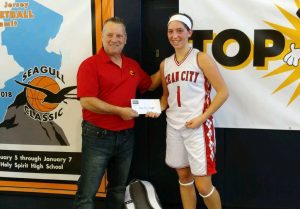 Danielle Donoghue is presented with a gift certificate from Top of Crop by John Rodio after being named the game MVP.

Donoghue was named the game MVP and won a gift certificate. She made six of 14 shots for 13 points, grabbed five rebounds, made two steals and had five assists. Donoghue talked about the game in a brief video interview, below, after the game.

Baker added 11 points and four rebounds for the Raiders (8-0) with Finnegan grabbing 10 rebounds.

“We knew Lenape’s record (2-4) coming in,” said OCHS coach Paul Baruffi, “but it was misleading. They have played a tough schedule and they do a lot of things well.”

Lenape’s losses had come to No. 7 ranked Cherokee, No. 16 Rancocas Valley, No. 20 Winslow Township and to Saddle River Day School, one of the top ranked teams in New Jersey.

On Sunday they added Ocean City to the list of good teams that had beaten them.

FREE THROWS: The OCHS girls, ranked No. 11 in the Online 25, will visit Lower Cape May on Friday …. the Raider boys host No. 18 Middle Township Monday night and the Lower Cape May boys come to town on Friday. Both games can be heard live on 98.7-The Coast and will be video streamed through OceanCitySports.com …. box scores, schedule, results, stats and more are available at http://www.oceancitysports.com/OCDiary.html.