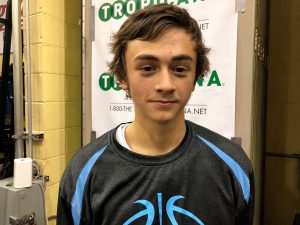 ABSECON – Zach Cerasi is a prime example of the cliché that says you should never judge a book by its cover.

Cerasi stands just 5-foot-8 and might not weight much more than 150 pounds. But the diminutive senior guard from the Lower Cape May Regional High School boys basketball team certainly played big against rival Wildwood on Saturday.

Cerasi was one of the main contributors for a Caper Tiger team that made 12 three-pointers in only 24 attempts and shot 23 for 45 from the floor overall (51.1 percent) in a surprisingly dominant 71-56 victory.

The game was played at Holy Spirit High School as part of the reincarnated Seagull Classic. The Seagull Classic was once the premier high school basketball showcase event in the 1970s and 1980s. It was brought back this year by a basketball officials group, which is raising money through the event for charitable causes.

After Wildwood led 22-15 early in the second quarter, Lower Cape May went on an extraordinary 20-2 run, fueled in part by four three-point baskets, to take a 35-24 lead at the half. Lower went on to lead by as much as 21 points in the fourth quarter before settling for its impressive 15-point win.

“I thought in the first quarter we were getting the kind of shots we want but we just didn’t make a lot of them,” Lower coach Scott Holden said. “I told the kids we were fine with what we were doing and that eventually they’d start to go down. We really shot it well from about the middle of the second quarter on.”

“When we played Wildwood last year we had a nice lead in the second half and then they had a phenomenal fourth quarter and beat us,” Holden said. “I reminded the kids of that at halftime and not to lose focus, play the smart game and play for each other and I thought we did that.”