Longtime volunteer assistant coach Al Melini (second from right) poses for a picture with the rest of the Wildwood High School girls basketball program after they won a bracket championship at the 2016 Boardwalk Basketball Classic. Melini, who coached at Wildwood for nearly 30 years, passed away earlier this week. He's flanked in the photo by former head coach Dave Troiano (left) and former assistant coach Tom Mitchell (right). 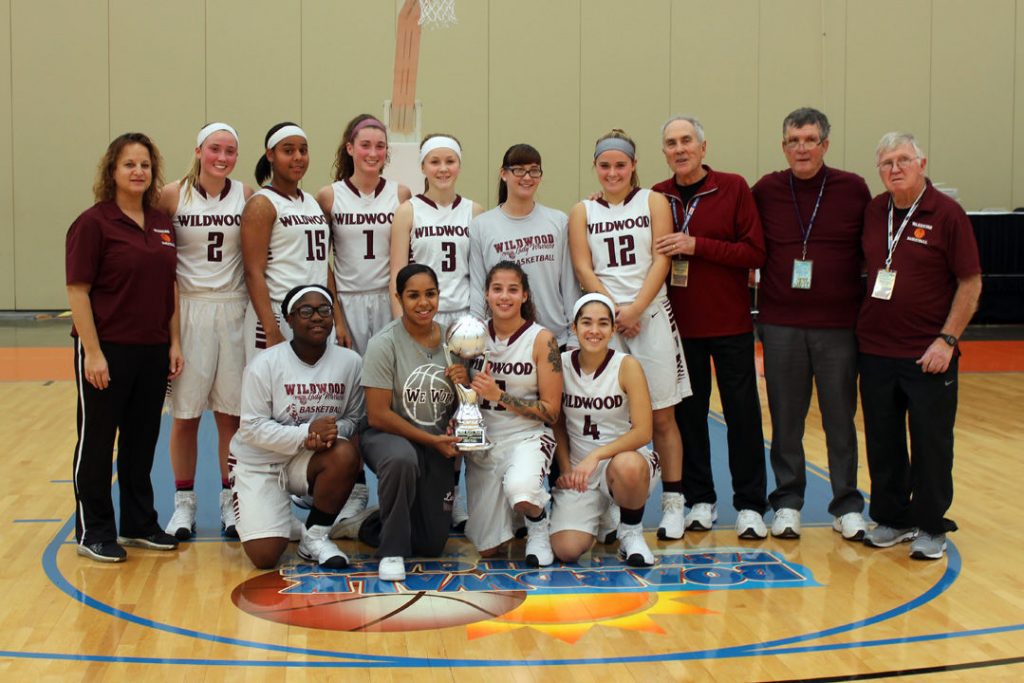 Longtime volunteer assistant coach Al Melini (standing, second from right) poses for a picture with the rest of the Wildwood High School girls basketball program after they won a bracket championship at the 2016 Boardwalk Basketball Classic. Melini, who coached at Wildwood for nearly 30 years, passed away earlier this week. He’s flanked in the photo by former head coach Dave Troiano (left) and former assistant coach Tom Mitchell (right).

In March of 2000, the Wildwood High School girls basketball team trailed Mountain Lakes by 10 points going into the fourth quarter of the state Group I championship game.

After a thrilling comeback that forced overtime, Wildwood went on to win the game, doing so with many freshmen and sophomores among the key players. It was the first of three straight state titles the program would win.

As the players celebrated on the floor at Elizabeth High School following the unlikely comeback victory, longtime Wildwood assistant coach Al Melini stood on the sideline watching the scene with a huge smile on his face. He turned to a reporter and said, “This is like something out of (the movie) ‘Hoosiers.’ They make movies about stuff like this.”

Melini, who had served as a volunteer assistant under head coach Dave Troiano for close to 30 years, passed away in his home earlier this week, only a few days after spending some time at the Boardwalk Basketball Classic holiday tournament in Wildwood. He was 70.

“I said goodbye to him at the convention center on Saturday and it proves that you just never know when it’s going to be the last time you’re going to see somebody,” Troiano said. “When I got the news earlier this week I was just devastated.”

Melini, a graduate of Seton Hall University and a longtime educator in the Vineland Public School system, was a Dennis Township resident who also worked part-time at Avalon Golf Club when he first joined Wildwood’s program as a coach. He was brought along by then-assistant coach Mike Coront, who knew Melini from the golf club.

“When I first met him, it seemed like we had known each other for 10 or 20 years,” Troiano said. “We hit it off real well. I’ll always remember him for his comic relief. When things weren’t going well, he had a way about him to lighten the mood and make us all laugh and smile. He was very knowledgeable about the game but he was always a very funny person who could put things in perspective when maybe the rest of us were taking certain things too hard or too seriously.”

Melini joined Wildwood’s program shortly before the team won its first state championship in 1991 and remained through the rest of Troiano’s tenure. He was on staff for four state championships and seven South Jersey titles, including last winter’s sectional championship. He decided to walk away only after Troiano retired in the fall after 39 seasons as coach.

Melini was nicknamed “The General” by some of the people close to Wildwood’s basketball program, due to his affinity for former Indiana University men’s basketball coach Bobby Knight.

“The kids all liked him. I think there was maybe one time in all the years he got angry with the girls,” Troiano said, laughing. “Other than that he was always very positive. He had some neat mannerisms with the kids. Being a teacher himself, he was always talking to them about bettering themselves in the classroom and on the court.”

Melini was predeceased by his wife, Sally, who passed away almost four years ago. He is survived by his brother, Rich, a former longtime South Jersey basketball official, as well as other extended family members and many friends and colleagues he met over the years, often through teaching, basketball and golf.

According to an obituary listing, a funeral visitation for Melini will be held Tuesday, Jan. 9, from 6 to 8 p.m. at Rone Funeral Home in Vineland. A memorial service will follow at 8 p.m.