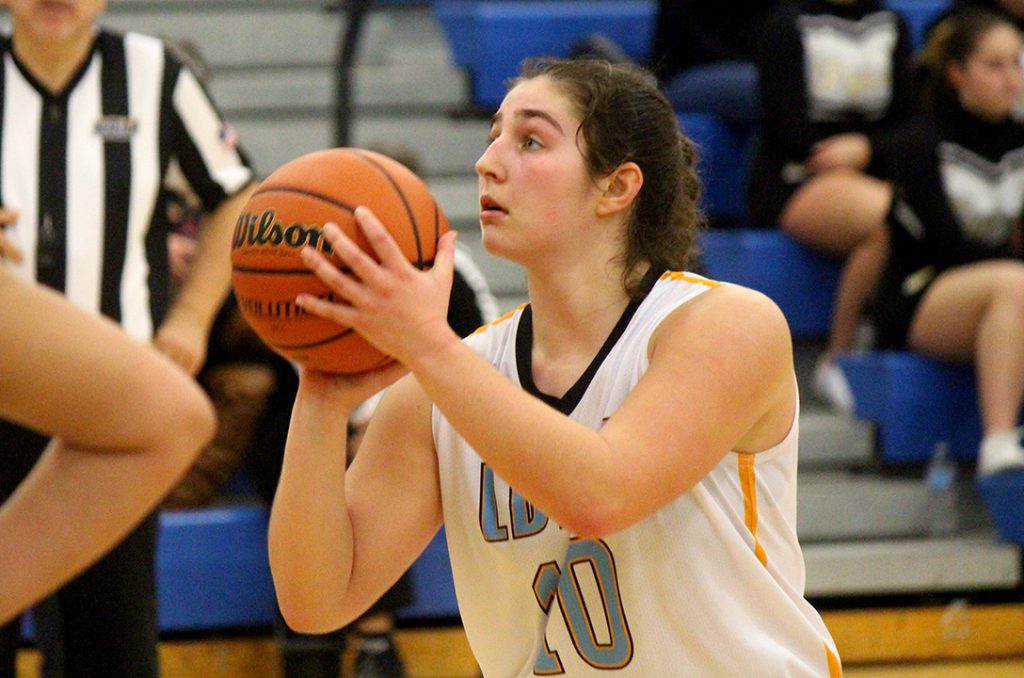 ERMA — Olivia Levin is in the twilight of her career with the Lower Cape May Regional High School girls basketball team.

“I’ve definitely learned not to take the game for granted,” she said Tuesday, after the Lady Tigers won their final home game of the season, beating Vineland, 61-45, behind Levin’s 20 points.

Levin, a 5-5 shooting guard, was considered one of the Cape-Atlantic League’s top players after a strong start to her junior season. But she tore the anterior cruciate ligament in her right knee in a game in late January and missed the remainder of the season.

Cleared to play only a couple of weeks prior to the start of her senior season, Levin has managed to compete through some discomfort and lead an otherwise young Lower Cape May team.

“I definitely had to adjust to the brace,” said Levin. “A lot of it’s mental. It’s still a little hard to trust it. It’s not painful but the mental part has still affected me.”

Levin has still managed to post a fine season. She’s played in all 25 games and is averaging 12.9 points per game. She’s made 41 three-pointers and is shooting an impressive 79.3 percent from the foul line.

Very good numbers for a player only 13 months removed from a major injury.

“She doesn’t say anything at all, but I’d bet she’s only playing at 65 or 70 percent,” Lower coach Scott Douglass said. “She still shows signs that her knee’s sore but she just plays right through it.

“We’re a little limited offensively and she knows she has to press the issue and get baskets for us. She’s coming out every night and drawing the best defender on the other team and she still puts points on the board. She works hard and it’s great to see her having a good year after what happened, especially to do it for a struggling team.”

The injury has allowed Levin to view the big picture, rather than focus on the setbacks that have occurred for a team that is 8-15 on the season.

“My season hasn’t been too bad,” she said. “I’ve had to work at it to be back. I’m not exactly happy with it because I think I could have played better but at the same time I’m very happy to be out there and able to do this again.”

If not for her injury, Levin most likely would have challenged to score 1,000 points for her career, even though she didn’t play as a freshman.

“My career’s been short,” Levin said. “But I feel like I’ve bonded with my a teammates a lot and I’ve had a lot of fun.

Levin is planning to continue her career at the college level. She’s considering Washington College and Ursinus, a pair of Division III schools.

Wherever she lands, there’s no doubt she’ll appreciate the opportunity to simply play the game that was once taken away from her.

“This has been a learning experience from the standpoint of life,” Levin said. “One second I was out there playing and then the next I wasn’t. I’ve kind of learned to appreciate the little things.”

BASKETBALL SHORTS: Sophomore Helena Roesing and freshman Chloe Lawler were also each in double figures for Lower in the win over Vineland with 13 and 10 points, respectively. … The Lady Tigers finish the regular season Friday at Cedar Creek. Then they travel to Collingswood for a first-round South Jersey Group II playoff game next Tuesday.