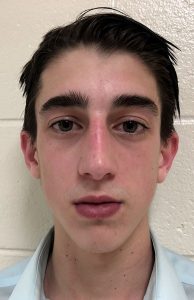 ERMA – After a fourth quarter in which the boys basketball teams from Ocean City and Lower Cape May traded big three-pointer after big three-pointer, it was a pair of foul shots with less than a second to play that ultimately decided Wednesday’s game.

Joey Sacco sank a pair of free throws with 0.5 on the clock to give Ocean City a 56-54 win that vaulted the Raiders into sole possession of first place in the Cape-Atlantic National Conference.

Lower Cape May had possession with less than a minute to go and was attempting to hold the ball for a final shot with the score tied at 54. But the Tigers turned it over on a drive into the lane. Eric Greenling picked up the loose ball and passed to Sacco, who pushed the ball across halfcourt and was fouled while dribbling at the top of the key.

Lower’s Pat Holden got off a desperation three-point attempt from 50 feet away that fell just short of the rim as time expired.

The victory was Ocean City’s 10th straight, marking the first 10-game winning streak by a Raider team in 34 years. More importantly, it improved the Raiders to 9-1 in conference games (16-3 overall). The Raiders have another important conference game Friday at Holy Spirit.

The top two teams in each of the CAL’s three conferences, plus two wild card teams, qualify for the CAL playoff tournament.

“I love when you can take it one game at a time and the next game is a big game,” Ocean City coach John Bruno said. “We’re kind of in a unique situation because we’d always seem to be looking at being the third team (in the conference) and looking to get in with the wild card. Now we’re actually in position to win it.

“We didn’t really talk about winning the conference. It was always, just qualify for the state tournament first. And I think before you start talking about doing something first, you’re better off putting yourself in position for it. Now we’re in position to take a shot at it.”

Ocean City trailed by four points at 51-47 after a three-pointer by Lower’s Martin Anguelov with less than three minutes to play. But Luke Varallo made three-pointers on consecutive possessions to give the Raiders a 53-51 lead. Holden responded with a three-pointer to put Lower back ahead by a point with 1:13 remaining. Varallo then sank a free throw with 50 seconds to go to tie the score and set the stage for the dramatic finish.

After a relatively low-scoring first three quarters, the teams combined for eight three-pointers in the fourth.

“I’m not all that into clichés,” Bruno said, “but this really did feel like a boxing match and both teams were out there trying to see who could throw the biggest haymaker. I think we’re two evenly matched teams.”

Varallo led Ocean City with 15 points. Issac Robertson added 11 off the bench and Donovan Graham chipped in 10, getting eight of them in the fourth quarter. Greenling came off the bench to provide three points, eight rebounds and five blocked shots.

“We have to try to take care of what we need to care of,” said Scott Holden, whose team plays at Mainland in another conference game Friday. “We have Mainland away and we’re going to need to win that. But Ocean City’s in the lead and now they’re in control. If we had gotten a different result here, we’d be the ones with it to lose.”

Lower played much of the game without starter Zach Cerasi, who left the contest midway through the first quarter after suffering an apparent knee injury.