PHOTO GALLERY: Lower-Middle golf ‘Parents Day’ is a tradition unlike any other

Middle senior breaks out after season on sideline

When Kayla Cubernot twisted left her knee and fell to the ground during practice for the annual Middle Township High School Powder Puff flag football game in November 2016, she didn’t think much of it at first.

“I honestly didn’t think it was anything too serious,” Cubernot recalled. “I got right up off the field and went over to the athletic trainer. But then when I went to the doctor, it was like totally unexpected (what she was told). My mind was blown. I knew right then my season was over.”

Cubernot had torn the anterior cruciate ligament and meniscus in the knee. A Cape-Atlantic League all-star outfielder as a sophomore, Cubernot was forced to miss her entire junior season for the Lady Panther softball team.

Cubernot tried to stay positive through the experience.

“It was definitely hard, but I think by just watching I gained a lot of knowledge of the game,” she said. 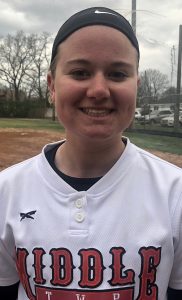 She’s been putting that knowledge to good use now that she’s back on the field for her senior season this spring.

On Tuesday, Cubernot belted three hits and drove in five runs, including the one that ended the game on the mercy rule, as Middle topped county rival Lower Cape May, 10-0, in five innings.

Cubernot has proven to be arguably the best high school softball hitter in Cape May County so far this season. Through Tuesday, she was hitting .500 on the season, with 13 hits in 26 at bats. Twelve of those hits had come in her last 18 at bats over her last five games, a stretch in which she has driven in 13 runs and had at least two hits in every game.

“She was a first team all-conference outfielder as a sophomore, so having her back makes a huge difference for us,” Middle coach Lauren Ruef said. “Her bat has really come alive and she takes control of our outfield on defense. But more than anything, with her it’s her experience. She knows the whole game offensively and defensively.”

Cubernot received medical clearance to play softball again last October. She was able to get a few at bats toward the end of the fall club softball season with the Jersey Shore Diamond Crush. But there’s no question she was eagerly anticipating the start of the high school season this spring.

“I was definitely really excited to be back,” she said. “Now I feel like I’m back to full strength and I’m confident in myself. I’ve been able to get back in the swing of things. And I actually feel a little faster when I run, too.”

Cubernot, 18, a resident of Cape May Court House, has been accepted at Towson University, where she plans to study cell-molecular biology in hopes of becoming a physician’s assistant. She said she has turned in a request with the coaching staff to try out as a walk-on player for the school’s Division I softball program.

But Cubernot is in no hurry for her senior season at Middle to end.

“Since I wasn’t able to play last year, I’ve learned not to take anything for granted,” Cubernot said. “I’ve learned to appreciate every single opportunity I’m given. I definitely appreciate the sport a lot more now that I’ve come back.”

She’s certainly exhibiting that appreciation through her performance.