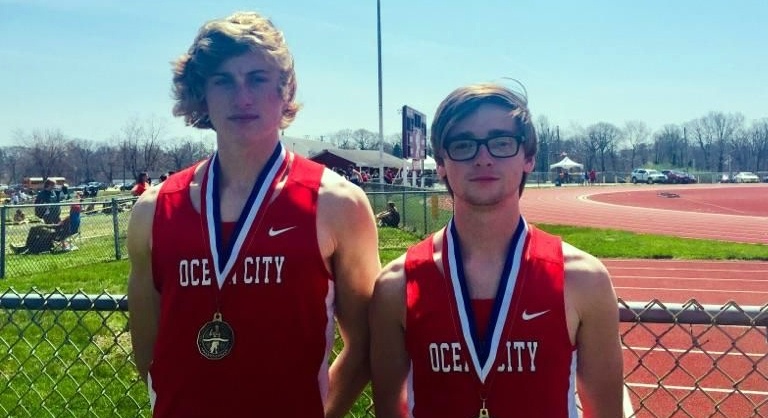 Every one of the eight OCHS teams is at .500 or better and four of them are in first place or tied for first in the Cape-Atlantic League standings. 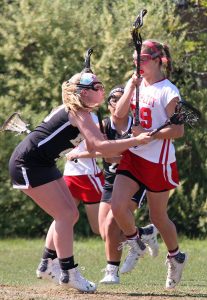 Girls Lacrosse defeated Rancocas Valley, Egg Harbor Township and Cedar Creek by a combined 49-11 during the past week. Shannon O’Reilly, who is committed to LaSalle for field hockey, scored her 100th career goal against Cedar Creek. Emily DiMarino (above) scored six times Saturday against RV with Danielle Donoghue getting three goals and three assists. DiMarino leads the team with 18 goals this season with Donoghue and O’Reilly each scoring 15 times. Donoghue leads the team with 13 assists. Alyssa Morrison’s Raiders are at Oakcrest on Monday, host Millville Wednesday and visit Holy Spirit on Friday.

Boys Track got some strong performances Saturday at the Bridgeton Relays when Matt Zelinski and P.J. Short (below) finished one-two in the 400 meter hurdles and Liam Bergman and Kevin King were the top two in the triple jump. In addition, the distance medley relay team was second and the sprint medley team third. Matt Purdue’s boys will host Bridgeton and Vineland at Carey Stadium on Tuesday and will head to the Woodbury Relays on Saturday. 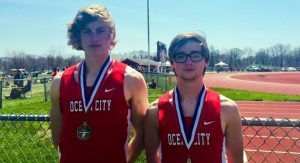 Baseball (6-1) has won four straight including a 16-0 advantage in three games against CAL teams. In a non-league game on Saturday, Wyatt Stetzer allowed just one hit in five innings as Andrew Bristol’s team defeated Haverford (PA) High School, 7-1. Jaden Millstein had a double, two singles and two RBIs and Issac Robertson had three singles and scored twice. Millstein (below) is hitting .714 and Robertson .360 on the season. Dan Nunan – who leads the team on the mound with a 2-0 record, 0.00 earned run average and 23 strikeouts in 12 innings – leads the team with 10 RBIs. Ocean City will host Absegami on Tuesday afternoon, will play an important game at Mainland on Thursday and will be home with Cedar Creek on Friday. 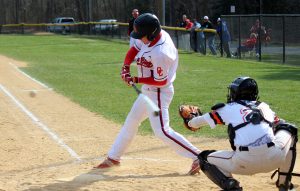 Golf (4-1) had won its first four matches until St. Augustine was a 147-161 winner over the Raiders at Greate Bay. Isaac Royster led the Raiders with a 37, including a trio of birdies. Jack Sullivan, who leads the team with a 37.5 average, shot a 40. Ed Ritti and Bryan Chojnacki take the team to Galloway National on Tuesday for a tournament. The Raiders will host Millville and Vineland at Greate Bay on Wednesday and Absegami on Thursday. They complete the week Friday playing at Brigantine Links against Atlantic City.

Boys Lacrosse (5-2) defeated Egg Harbor Township, 15-4, on Friday to remain undefeated in the CAL. Christian Kuhn scored five times and made three assists. Jake Schneider added three goals with Joe Lloyd and Chris Raniszewski each scoring twice. Marty Cattie (below) leads the team with 17 goals this season with Kuhn scoring 15. Lloyd has a team-high 16 assists. Joe LaTorre’s team will host Oakcrest on Monday and Holy Spirit on Thursday, both at Carey Stadium. 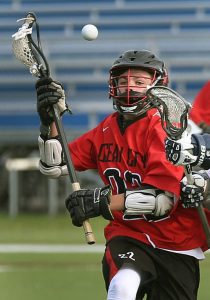 Boys Tennis (4-1) made it four straight on Friday by beating Lower Cape May, 5-0. Tim Kelley’s Raiders lost their opener to Mainland, the defending South Jersey Group 3 champions. Ryan Roller, Tanner Tomassi and Manav Randheri swept the singles matches against Lower in straight sets. OCHS goes to Wildwood Catholic on Monday and to Shawnee on Tuesday. The Raiders host Oakcrest on Wednesday and Middle Township on Friday.

Softball (2-1) defeated Lower Cape May, 11-1, in five innings. Lindsay Konick was two-for-two and scored three times. Alex Vitola and Jackie Nesi each drove home three. Catherine Faust struck out five, allowed four hits and no earned runs for the win. Konick is batting .833 over the last two games and Vitola .667. John Bruno’s team goes to Absegami on Tuesday, hosts Mainland on Thursday and travels to Cedar Creek on Friday.

Girls Track (1-1) got a win in the distance medley and 4×800 relay at the West Deptford Relays. Alexa Weber, Grace Burke, Alexa Palmieri and Casey McLees carried the baton in the distance medley. Erin Hanlon joined Weber, Palmieri and McLees in the 4×800. Tim Cook’s Raiders will go to Bridgeton on Tuesday for a tri-meet that also includes Vineland. They go to the Woodbury Relays on Saturday. 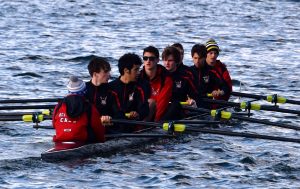