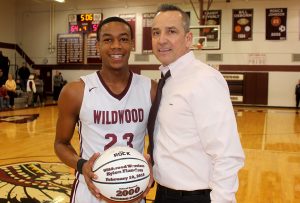 Wildwood’s Kyion Flanders, with coach Scott McCracken after scoring his 2,000th career point during his senior season, is set to play college basketball at Stockton University.

Flanders is one of Cape May County’s most prolific scorers, having finished his career as the Wildwood boys program’s all-time leading scorer with 2,131 points. He is one of just five high school boys basketball players in county history to eclipse 2,000 career points.

Flanders averaged 20.6 points, 5.6 rebounds and 4.3 assists for Wildwood in 2017-18, leading the team in all three categories. Flanders led the Warriors to a share of the Tri-County Classic Division title in each of the last two seasons, in which Wildwood went a combined 39-17.

Flanders led the state in scoring as a junior, averaging 28.9 points per game.

Stockton showed significant interest in Flanders dating back to his junior season at Wildwood. Stockton coaches were in attendance at many of Wildwood’s games this season, including nearly every home game. Flanders chose Stockton over Penn State-Harrisburg.

In late March, Flanders was honored by the South Jersey Coach-Official Basketball Summit as one of its four recipients of $1,000 in college scholarship money.