CoastSportsToday.com Athlete of the Week: Marissa Giancola, Lower Cape May

The win improved Lashley’s record to 4-0 and dropped his earned run average to 0.24. And, to add to his dominance in the game, Lashley – a .450 hitter – scored the game’s only run in the third inning when senior Dom Monteleone drilled a two-out double with Lashley on third. 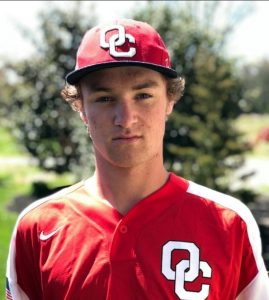 Lashley struck out 15 and walked one while throwing 98 pitches. Only two Middle batters reached base. He now leads the team with 53 strikeouts in 29 innings. Middle junior Garrett DiPalantino pitched well. Though 0-3 on the season, DiPalantino has a 1.24 ERA.

The Raiders go after their 10th straight win on Thursday afternoon against Lower Cape May at 5th & Bay. On Saturday night (6pm) Ocean City will play Atlantic City under the lights in Ventnor.

In other OCHS action today, Boys Lacrosse (11-3) bounced back from a loss in Delaware on Monday to defeat Vineland, 17-1. A total of 13 different players scored for the Raiders and all 17 goals were assisted. Freshmen Drew Brooks, Chris Calabro and Connor Meehan each scored his first career varsity goal.

Senior Liam Bergman led the way as Boys Track (7-1) swept a tri-meet in Millville. Bergman was a jumping wizard, winning the long jump, high jump and triple jump. He was also part of the winning 4×400 meter relay team. Matt Purdue’s team defeated Millville, 91-41, and St. Augustine, 78-62, to finish the dual meet season with a 7-1 record.