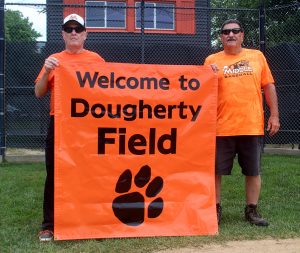 Dougherty, who has coached Middle for 25 seasons over two stints, won his 300th career game when the Panthers upset Manchester Township in the first round of the state tournament a couple of weeks ago.

With many former players and former players’ parents on hand, the Dougherty brothers were presented with a banner officially naming the field by Clark and DeVico.

“I’m glad I’m alive to see it,” Chuck Dougherty said with a laugh. Quickly turning reflective, he added, “It’s a great thing, and it’s something I’m glad my brother is part of, too, because he deserves it. But this is something I never envisioned happening. It’s a great honor for them to do this for us.”

Dougherty has coached baseball or softball at Middle as either a head or assistant coach almost every season since 1971. He was first the head coach of the baseball program for six seasons beginning in 1979, then returned in that capacity in 2000 and has served ever since. He also had two different stints as the school’s head softball coach. His brother has been his assistant coach in almost every season.

Dougherty is a 1966 graduate of Middle. He finished his high school career as Middle’s first career 100-hit player. Frank Dougherty, also a standout player at Middle, graduated for the school in 1962.

The Dougherty brothers are also scheduled to be officially honored by Middle Township Committee this week.