We are all currently living through a golden era of boys basketball in the Cape-Atlantic League.

It is obvious that Atlantic City, St. Augustine Prep and Wildwood Catholic have become three of the finest programs in South Jersey. But there are more. And it is because of coaching.

But there was another golden era in CAL basketball.

And, again, it was coaching that made the difference.

Tom Feraco came later at Middle Township and both Ed Salmon at Millville and Scott Beeten at Mainland had brief tenures. 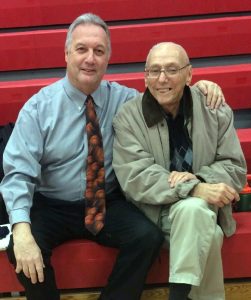 George Holden (above, with Bruno) was a big part of that golden era.

His Lower Cape May teams won just over 150 games, including a pair of league championships. His overall total of 216 victories included four seasons in the Colonial Conference.

Holden, who died on Friday after a long battle at age 84, coached Charlie Wise, who went on to be the Big Five Player of the Year at LaSalle.

He also coached John Halbruner, Kyle Anderson, Greg Douglass, Brian Jones and his son, Pat Holden, who was one of the top scorers in CAL history and returned to become the Lower coach with the most career wins.

Scott Holden, another of George’s sons, is the current coach at Lower Cape May and, like the rest of the family, loves the sport of basketball.

Because George Holden’s contributions to the Cape-Atlantic League and the sport he loved go way beyond the 200-some wins. The Holden family is one of the premier families in South Jersey hoops.

In addition to his sons, granddaughter Lauren Holden and grandson Patrick Holden both scored more than 2,000 career points. Watching them gave him great enjoyment.

When Boyd retired at Ocean City in the late 1980s, he talked about competing in the CAL.

“To compete in the type of league we have down here,” he said, “against the great coaches you line up against night after night, it takes 12 months of work.”

He was talking about coaches like Leary, and Mogan, and McCracken, and St. John.

And he was talking about George Holden, whose coaching contributions put him in that group. And whose family’s accomplishments, which brought him the greatest joy, have been exceptional.