Lower Cape May's Pat Moore is congratulated by teammate Jackson Schiffbauer after scoring a touchdown during the Tigers' win over Riverside.

Moore, a senior running back, defensive back and kicker, helped the Lower Cape May Regional High School football team win its season opener by scoring three touchdowns in a 54-38 win over Riverside. 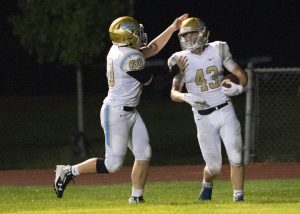 The game took three days to complete. It started Friday at Lower Cape May but was suspended with 3 minutes, 45 seconds, to play in the second quarter due to lightning flashes. It finished Monday evening at Riverside.

But there was more than just the three touchdowns and a victory for the high school football debutant.

Moore scored the first touchdown of the game during Friday’s portion of the contest on a wild, bizzare play. Moore had his 22-yard field goal attempt blocked but he managed to scoop up the loose ball and rush into the end zone, breaking numerous tackles along the way.

The touchdown run was recognized by Hudl, a website thousands of sports teams across the country use for uploading, editing and sharing video. Hudl named Moore’s touchdown its No. 1 high school football play of the week.

“I got a notification from Hudl that they mentioned me in something but I wasn’t sure what it was,” Moore said. “I clicked the video and saw it was their top five plays of the week. I was watching it with my teammates and we were all wondering when it was going to come up. When it was No. 1, we all got really excited.”

Moore is playing football this fall for the first time since he was in the fifth grade, so he was unsure if he could make a play on the ball after his kick was blocked.

“When it got blocked, the ball dribbled toward the ref and he backed away from it so I picked it up,” Moore said. “When I did get it, everyone started running at me and that’s when I knew it was live.

“It was fourth down and I just didn’t want the ball to go farther back for (Riverside to get better field position). I just wanted to get it as close to the end zone as I could and it just so happened that I scored on it.”

Moore later scored on a 24-yard run during Friday’s portion of the game before adding a touchdown catch during the game’s completion on Monday. He also kicked six extra points overall.

Moore played soccer for his first three high school seasons and was one of Cape May County’s better players last fall, scoring 10 goals for the Caper Tigers. But he wanted a change.

“I played both sports up until fifth grade but it just got to be too much so then I decided to stick with soccer until this year,” said Moore, also a starter for Lower Cape May’s basketball team. “I kind of wanted to play (football) last year but I thought soccer was the best thing for me. But then some of my friends I grew up with, we just decided to go out for the football team for our last year and just have fun.”

It’s certainly been a good experience so far.

“It’s been really fun playing with a different group of guys I normally wouldn’t play with,” Moore said. “It’s a lot different than soccer because you’re either hitting someone or getting hit on every play. There’s a lot more hype in football. When there’s a big play, all your teammates get excited and everyone gets going.”