The Middle Township High School field hockey game thrust itself back into the race for the Cape-Atlantic National Conference championship with a key victory Monday afternoon.

Caroline Gallagher’s goal off a penalty stroke in the first half accounted for the only scoring as Middle slipped past Cedar Creek, 1-0. The Pirates (9-3-1 overall) were handed their first conference defeat, falling to 8-1 in CAL National games. 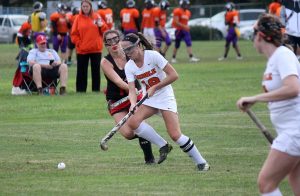 Lower Cape May (12-2 overall, 8-1 conference), which scored a 4-1 win over Buena Monday, is currently tied for first place in the conference with Cedar Creek.

Lower and Middle split their two games against one another this season. Lower still must play Cedar Creek twice before the end of the regular season.

Kaitlyn Hand stopped five shots to get the shutout in goal for Middle, which has won five out of its last six games.

Gallagher’s goal was her 15th of the season, tops on the team.