VIDEO: LCM shuts out Pitman, is over .500 in October for first time in 7 years 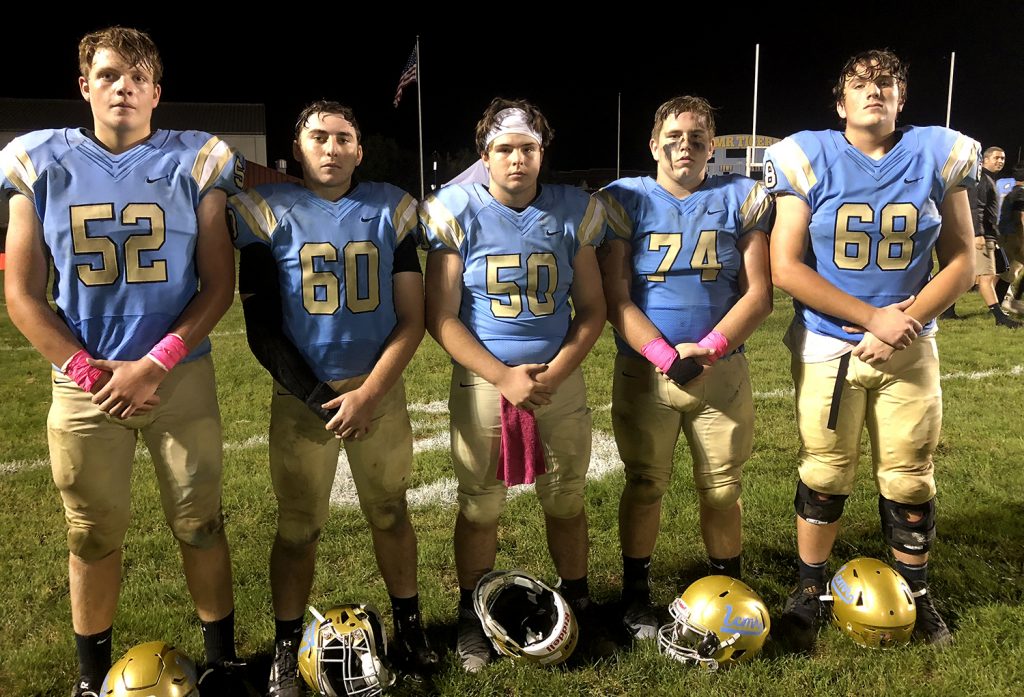 Lower Cape May offensive linemen (from left) Joe McGhee, Jackson Schiffbauer, Sean Connelly, Thomas Rossett and R.J. Lamoreux paved the way for the Tigers to rush for more than 300 yards in Friday’s win over Pitman.

It’s something that hasn’t been said about the Lower Cape May Regional High School football team this far into a season since 2011, but it now applies after the team’s thorough 26-0 victory over Pitman on Senior Night Friday.

Lower Cape May (3-2) ran for 305 yards against a Pitman team playing its first varsity game of the season, as linemen Joe McGhee, Jackson Schiffbauer, Sean Connelly, Thomas Rossett and R.J. Lamoreux paved the way for Tiger backs to average 7.4 yards per carry for the game.

Pitman, in the midst of rebuilding its program, played exclusively at the junior varsity level last fall and is playing only a handful of varsity games in 2018.

“We knew they were going to come out really excited with this being their first varsity game and we told the kids to make sure they matched that excitement,” Lower coach Brian Hindle said. “It’s nice especially for the seniors to go out and get a win on our Senior Night.

“For us to get to that three-win mark at this point and show this kind of improvement is super important. It’s important to us as coaches, it’s important to our program and we had a lot of the youth players out tonight so it’s good for them to see what our program is doing, too.”

Lower Cape May exhibited its dominance from the start. Jonas Lumbruno, who finished with 111 rushing yards on nine carries, scored the first of his two touchdowns on a 46-yard run on the fifth offensive play of the game.

Six minutes later, Connor Eckel tossed a 30-yard touchdown pass to Darion Lamar as the Tigers opened a 13-0 lead before the game was nine minutes old.

Lower upped the lead to 19-0 following an 11-play, 62-yard drive, with Eckel rushing in from three yards out.

The Tigers finished the scoring with 2:18 to go in the third quarter on Lumbruno’s second touchdown run, this one from one yard away. That came three plays after a wonderful 32-yard run by Lamar that brought the ball to the Pitman 1-yard line.

Lower Cape May’s defense made 13 tackles for losses, including six sacks. Senior Kenny Haungs picked off two passes in the end zone, returning one of them 67 yards.

Not only has Lower Cape May moved over .500 through five games, but the team also is favored in its next contest at Wildwood next week.

“We’re seeing people talking about our team, how we’re on the rebound and how we’re moving forward,” Hindle said. “It’s nice to hear people being positive about us. Now we have to keep building upon that.”