WILDWOOD — The Wildwood High School boys soccer team had a chance to set a new program record for victories in a season Tuesday evening against county rival Cape May Tech.

The Warriors made the most of it. 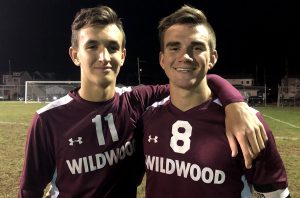 Wildwood teammates Will Long (left) and Tyler Tomlin each recorded a hat trick in an 8-1 win over Cape May Tech.

Wildwood scored three times before the game was 11 minutes old and rolled to an 8-1 victory over the Hawks, improving to 11-3 on the season. Wildwood’s previous best win total came two seasons ago when the team finished 10-10-1.

“There are people I know, there are alumni, they’re talking about them because of what they’re doing and how they’re winning,” Wildwood coach Steve DeHorsey said. “This is something that’s bigger than they are as individuals. Hopefully these guys remember this for a long, long time.”

Tyler Tomlin and Will Long accounted for the first two goals for Wildwood. Both would finish with a hat trick. The two senior forwards have combined for 37 goals through 14 games. Tomlin leads all Cape May County players with 24 goals, with Long adding 13.

“Those early goals set the tone,” DeHorsey said. “As soon as we get up early, it gets us a little momentum and it allows us to go forward and play the game the way we want to.”

The Warriors were well on their way to victory when Tyler Tomlin added his second goal to make the score 4-0 with eight minutes to go before half.

Long netted two goals and Tyler Tomlin one in the second half. Starting goalkeeper Dennis Olgun got into the act late, scoring a few minutes after being moved to a forward position.

“I expected us to come out and play well. We needed to play well,” DeHorsey said. “We already got our 13 games in (that determine state playoff seeding), so now we’re onto the next phase and and the next goal, which is for us to get on track and get ready for the state tournament.”

Mike Brown scored for Cape May Tech (7-7) to prevent a shutout.