Reese Bloomstead scored her 27th goal of the season today

Big things will be happening on the Ocean City sports fields later this week.

The girls soccer game was moved to Thursday to avoid potential weather problems on Friday. 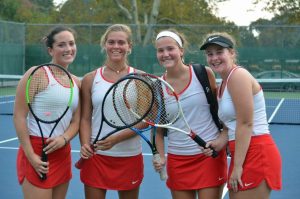 Bowman and Graham (above, left, with Blum and Ashley Devlin) demonstrated their success as singles players after winning the CAL doubles tournament last week. They earned a three-set (6-2,1-6,6-4) win over the Egg Harbor Township team of Gabrielle Guimapang and Angelina Lee.

In today’s field hockey win, a 4-0 victory over Absegami, Jaclyn Charbonneau scored twice with Reese Bloomstead and Sophia Gresham each adding a goal. Bloomstead, Nya Gilchrist and Chloe Prettyman each registered assists. OCHS dominated the action to such a degree that Maddie Kahn was only required to make one save to chalk up her 15th shutout of the season.

Kelsey Mitchell’s team, the No. 1 seed in Group 3, will host a No. 3 Clearview team that defeated No. 2 Mainland, 3-2, today. Ocean City has won 15 South Jersey championships in field hockey including five in the last six seasons. This will be Ocean City’s 11th straight year playing in the South Jersey final. Brian Cunniff was at today’s field hockey game and his photo album is below.

Kelly Halliday’s girls soccer team used two goals and an assist from Faith Slimmer (below) and a goal and two assists by Tori Rolls to defeat Absegami, 6-1. Delaney Lappin, Anna and Summer Reimet also scored goals and Carly Reighard added an assist. The Raiders, the No. 5 seed, will play at home Friday because Toms River East, the No. 13 seed, upset No. 4 Gloucester Tech, 3-0, today. 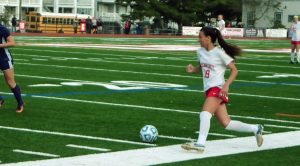 In the 7-1 boys soccer win over Timber Creek on Monday, Hunter Paone scored twice and added an assists. Matt Brook, Fisher Hudak and Luke Varallo each had a goal and an assist; Jadin Eafrati and John Lindsay had a goal; and Trevor Paone made two assists.

If the OCHS boys win on Thursday, they will play the Mainland-Pinelands next week at Carey Stadium.