PHOTO GALLERY: OCHS adds to its Sports Hall of Fame

One goal leads to two records for Warriors’ Tomlin

Wildwood's Tyler Tomlin races between two Pitman players to get a touch on the ball. 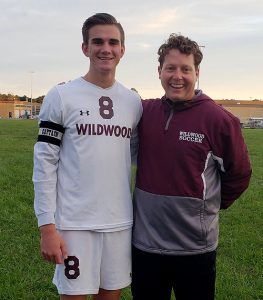 The last of the senior striker’s three goals in a 4-0 road victory over Camden County Tech set new single-season and career goal- scoring marks for the Warriors.

Tomlin upped his season goal total to 31 and his career mark to 57.

“It’s pretty crazy but it’s a really good feeling,” Tomlin said. “It’s been a lot of hard work I’ve put in to get these goals. I’m just happy I was able to do it today.”

Tomlin broke the records set by 2015 Wildwood graduate Jared Irwin, who is now a senior on the Cabrini University men’s soccer team. Irwin scored 30 goals as a high school senior in 2014 and finished his Wildwood career with 56 tallies.

Tomlin scored 13 goals last fall as a junior and entered this season with 26 career goals.

“I didn’t think about (either of the records) at the beginning of the year,” Tomlin said. “But midway through the season I realized I had a pretty good shot at doing it.”

Tomlin scored the milestone goal with about five minutes to play in the game. He received a pass down the right flank from Corlen Vallese, dribbled into the box and blasted a shot that ricocheted off the left post and into goal.

Wildwood improved to 13-4 with the win. The Warriors are in the midst of the best season in program history, having previously never won more than 10 in a season.

“This is like the perfect season for me and my team,” Tomlin said. “I’m real excited to keep it going and try to score more goals and get a lot more wins.”

Tomlin, also a basketball standout at Wildwood, said he hopes to play soccer at the college level. He said he has received interest from Widener, Rosemont and Wesley.

“He’s always had it in him,” Wildwood coach Steve DeHorsey said. “I knew at the beginning of the season he needed 30 goals to tie it and we only play (approximately) 18 games so that’s a lot of goals. Obviously he had to work for it and get after it.

“We didn’t really talk about it. I kind of just wanted it to play out. But you could tell he knew he was close by the way he played today because he was a little tight. So I was glad to see him get it today.

“Last year he improved tremendously and this year he continued in the same direction,” DeHorsey added. “He’s been the MVP. He’s been the guy offensively who made it go for us and he’s shown good leadership with the boys.”

Will Long scored the other goal for the Warriors in Monday’s victory. Dennis Olgun posted the shutout in goal.